"I bet you guys taste like chicken!"
―Sam Stone[src]

The Zumb'ul is an enemy that appears in the Serious Sam series.

Zumb'uls are a species of bipedal humanoid aliens from the planet Ras-ad-Nyk. They were trained by Mental in his 'East Clintwood' facilities, which were named after a famous 20th century gun-wielding actor. According to rumor, every Zumb'ul being trained passed because Mental threatened that they would spend the rest of their lives taking pictures of bridges if they failed. It turns out they all graduated.

Zumb'uls are mainly encountered alone or in pairs, mostly supporting other enemies. There are a few instances in later levels where several of them can be encountered at the same time. Most Zumb'uls are found guarding entrances or are located in elevated places such as pillars. 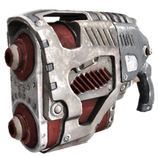 HD projectile model.
Add a photo to this gallery

A group of Zumb'uls attacking at Sam.
Add a photo to this gallery

Retrieved from "https://serioussam.fandom.com/wiki/Zumb%27ul?oldid=48323"
Community content is available under CC-BY-SA unless otherwise noted.