"There will be no bugs in this game!"
―Sam after he kills ZumZum.[src]

ZumZum is the second boss of Serious Sam 2.

ZumZum is a large hornet-like creature. He has two attacks: spawning ZumZum Jr.s and shooting projectiles at the player. He will also charge at the player and try to sting the target.

The fight starts with Sam under an enormous basket with a minigun in front of him. There are four flower pods in the surrounding area, which ZumZum will use to regenerate health when it goes too low, it is recommended you destroy these with the minigun. There are also other large items around the level, which Sam can use to take cover from ZumZum's attacks, however ZumZum Jrs can infiltrate them. 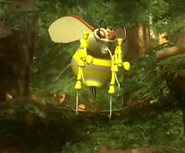 An early model of ZumZum.