The Zorg Mercenary is a common enemy that appears in Serious Sam: The Second Encounter and the Xbox, HD and VR versions.

The Zorg Mercenary is a bipedal, skinless lizard-like creature. Its people, the Zorgs, managed to create a large interstellar empire. After conquering more planets than they knew what to do with, they decided to take a very long break on a tropical planet in their system. They sunbathed all day from 10am to 4pm. After the years, these long sessions caused the Zorgs' skin to fall off.

After their disastrous vacation, Mental hired huge numbers of them and imported them from an unknown part of the universe to act as disposable grunts, in an effort to stop Serious Sam.

Mercenaries are the main lightweight ground troops in The Second Encounter, largely replacing Beheaded Rocketeers. They can be encountered in groups of any size and usually a few Zorg Commanders are found with them.

The Mercenary's attacks resemble those of Beheaded Rocketeers, with the differences being the Mercenary's gun firing two blasts in quick succession, with twice as much damage and faster projectile speed as the Rocketeer's projectiles. Generally, if one projectile hits a target, the other will almost always as well because of how quickly they are fired. They have no melee attack, even in Serious Sam HD and the VR version. 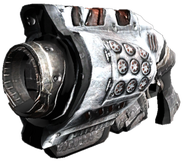 Retrieved from "https://serioussam.fandom.com/wiki/Zorg_Mercenary?oldid=53196"
Community content is available under CC-BY-SA unless otherwise noted.