The Zorg Commander is a bipedal, skinless lizard-like creature. Unlike Zorg Mercenaries, Commanders have some skin left, which is the reason why they were promoted to commanders. They're equipped with a shotgun-like energy weapon as opposed to the weak two-shot burst guns used by the Zorg grunts, and have slightly more health.

Unlike the Zorg Mercenary, the Zorg Commander fires a burst of laser beams from its gun, which deal more damage than that of the Mercenary's gun.

Like the Zorg Mercenary, the Commander does not have a melee attack, and will shoot at the player even at point-blank range.

These laser beams spread out from the center of the gun to create a 110 degree angle spread. This is very similar to the Beheaded Firecracker's attack, but the shots fired by a Commander do not hug the floor, do over twice as much damage, and are much faster. 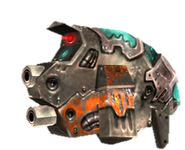 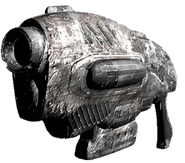 HD gun model.
Add a photo to this gallery

Retrieved from "https://serioussam.fandom.com/wiki/Zorg_Commander?oldid=51712"
Community content is available under CC-BY-SA unless otherwise noted.