Admir Elezović
The Zombie Stockbroker is an enemy that appears in Serious Sam 2.

The Zombie Stockbroker is a humanoid alien creature with grey skin dressed in a dirty torn suit that wields a shotgun. They were originally alive, but due to a shortage of Mental's favorite meal, stocks went down on all planets in the galaxy, resulting in the stockbrokers committing suicide. Since then, their ghosts have wandered around the universe in hope of finding eternal peace. Mental was so angry at his loss that he raised them from the dead, equipped them with malfunctioned shotguns and recruited them into his legions so they could pay their debts to him.

The Zombie Stockbroker has only two attacks; firing their shotgun, and kicking the player if they get too close. The shotgun has a fairly tight spread, which makes it powerful, even at long range.

Like a few other enemies in the game, the Zombie Stockbroker will regenerate its health if it is not killed properly. If the Stockbroker has taken sufficient damage, it will fall to the ground and then wake up after a few seconds.

Behind the scenes[edit | edit source] 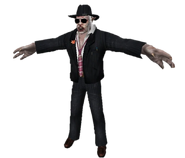 Beta model.
Add a photo to this gallery 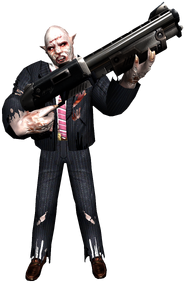 Shotgun model.
Add a photo to this gallery

Retrieved from "https://serioussam.fandom.com/wiki/Zombie_Stockbroker?oldid=57670"
Community content is available under CC-BY-SA unless otherwise noted.