Yagoda the Witch is an enemy that appears in Serious Sam 2. There are two variants of Yagoda; flying Yagodas and ground Yagodas.

The flying Yagoda rides a broom and casts a spell which fires a blue, teardrop-shaped projectile. To make her more dangerous, she flies around in erratic patterns, is fast, and bounces around when she hits something, like a wall. The ground variant holds a large, poisonous cauldron while floating around. The ground variant shoots homing skulls which are a little more powerful.

Yagodas only appear on Magnor. 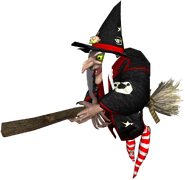 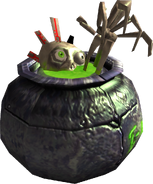 Skull projectile model.
Add a photo to this gallery

Retrieved from "https://serioussam.fandom.com/wiki/Yagoda_the_Witch?oldid=52686"
Community content is available under CC-BY-SA unless otherwise noted.