The XPMl21 Rocket Launcher, or just Rocket Launcher, is a powerful weapon appearing in the Serious Sam franchise. It is a standard-issue weapon used by Earth Defense Force infantry. It fires slow, unguided rockets at a decent rate of fire without having to be reloaded.

The XPML21 is the first of a new generation of portable missile launchers, designed to provide infantry forces with high-ROF anti-armor rockets. While the XPML21 is currently in the early stages of field testing and has only been issued to select Earth Defense Force personnel, it is already surpassing all expectations and is scheduled to go into full production in the near future.

The weapon's advanced loading mechanism is capable of firing up to 85 missiles per minute. These high-speed, unguided 150 mm Inferno missiles are very effective against smaller groups of armored opponents and larger groups of weaker enemies, but it is important for the player to remember to not fire this weapon at close quarters or directly against obstacles due to the large detonation radius of the projectiles.

In Serious Sam Advance, the rocket launcher fires chemically powered rockets. The rockets themselves can deal a lot of damage if they hit a target, and the explosion it makes can harm any enemy near the impact site, even if the rocket hits an enemy. It has a fairly high rate of fire and its projectiles are somewhat fast, which allows the user to quickly bombard a target with multiple rockets.

In Serious Sam 3: BFE, the rocket launcher has a much different design and new firing sounds. The firing and loading mechanism has also changed, but still retains the same fire rate from the previous games.

In Serious Sam 4, the rocket launcher looks very similar to the Serious Sam 3 version in appearance, but has a slightly different loading mechanism.

In its appearances, the rocket launcher is usually acquired during the early to middle portions of the game, though it can be found in secrets and obtained earlier.

In Serious Sam: The First Encounter, the rocket launcher first appears in Valley of the Kings, but can be obtained earlier in Temple of Hatshepsut as a secret, along with rockets. In Serious Sam: The Second Encounter, there are 3 rocket launchers that appear in Sierra de Chiapas, two of which can be found as secrets. In then appears on the first or second levels in the other eras.

In Serious Sam Advance, the rocket launcher is first obtained in Slave Quarters.

In Serious Sam 4, the rocket launcher first appears in Four Horsemen of the Apocalypse, but can be acquired in Death from Above as a secret.

This upgrade can only be obtained if the player completes the optional side quest in Gates of Hell. The upgrade is received automatically when the player loads the next level.

Beta rocket fired by the XPML21.

A screenshot with the beta XPML21 model from Test 1.

A screenshot of the rocket launcher in the Alpha build.

Rocket fired by the XPML21. 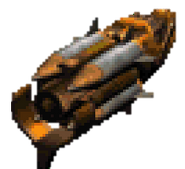 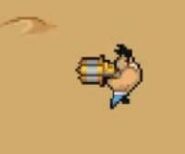 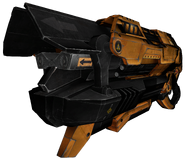 Rocket fired by the XPML21.

The rocket launcher with 5 rockets loaded at once.