Flame (10 + burn damage from being set on fire)

"Hahahaha! And now you're all fired!"
―Sam Stone[src]

The flamethrower is an experimental weapon that uses highly volatile napalm fuel to deliver a jet stream of flesh-penetrating flame. It is very effective for use on large masses, since the stream will engulf even partially hidden enemies. The fact that enemies will burn for a few moments after they've been hit makes this weapon even more effective. In addition, any enemy that touches it will be set on fire, which will do extra damage to them. The flame from the flamethrower can pierce multiple enemies. However, the flame from the flamethrower has limited range, making it useful only for short range combat.

In The Second Encounter the flamethrower is first found in Sierra de Chiapas, and then appears on the first level of every chapter onwards.

In Serious Sam 2, as of Update 2.90, the flamethrower can be made to appear in custom levels or added to the player's weapon inventory via cheats.

In Serious Sam's Bogus Detour, the flamethrower is first acquired in Trouble in Troy. 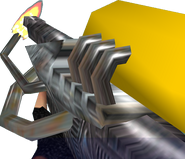 The first flamethrower model from the prototype version.