The XM214-A Minigun, or just Minigun, is a powerful weapon that has an extremely high rate of fire and is one of Serious Sam's signature and trademark weapons.

The logical final step in the evolution from the Gatling to the M61 Vulcan and the M134, the XM214-A is the latest in rotary machine gun technology. The weapon is self-powered and comes complete with a built-in magazine and a state-of-the-art recoil adapter, making it the most powerful personal weapon available to date.

At 1200 rounds per minute, the minigun can make quick work of single strong enemies or large groups of smaller opponents. However, having such a high rate of fire makes the weapon's ammunition deplete very quickly. Also, there is a delay before firing as the barrels need to spin up to full speed, although in Serious Sam 1, the minigun will sometimes fire immediately once the player presses the fire button.

In Serious Sam 2, Serious Sam HD, and Serious Sam VR, the minigun fires at a slower rate than in Serious Sam 1, but it deals double damage per shot, which means it spends less ammo than usual.

In Serious Sam 3: BFE, like its previous incarnations, the minigun still functions as a powerful crowd control weapon, able to cut down waves of enemies like grass. Ammunition, however, is not as abundant as it was in the previous games, though it is still relatively common in secrets. In Serious Sam VR: The Last Hope however, the player can simply buy ammo for the minigun.

In Serious Sam 4, the minigun is still a very powerful weapon and functions just like its Serious Sam 3 counterpart. Like the minigun from Serious Sam 1, it deals 10 damage per shot. It can also carry 1000 rounds on Normal difficulty as opposed to the usual 500.

The minigun is first obtained in Pyramid Maze Entrance.

In Serious Sam 2, the minigun first appears in the boss fight against ZumZum on Magnor. It appears again on the Kleer, Ellenier, Kronor and Sirius planets.

In Serious Sam 3 and the VR remake, the minigun is first acquired in The Dark Bride, although it can be acquired earlier than this in The Silent Riddler as a secret. Unlike previous games, ammo for the minigun is relatively scarce in this game.

In Serious Sam 4, Jones lends Sam the minigun to use during the fight against the Saggitarian Sidewinder. The player does not keep the minigun after this, however, as it belongs to Hellfire. The second time the player is given the minigun is after meeting Nonna and helping her fend off some of Mental's forces in Machina Ex Deus. The minigun is then later acquired in Viva la Résistance and From Earth With Love.

In Serious Sam: Siberian Mayhem, the minigun can be acquired in Crime And Punishment when entering the first building from passing all those trains.

Serious Sam 4 concept art of Hellfire with the minigun.

Serious Sam 4 concept art of Sam with the minigun. 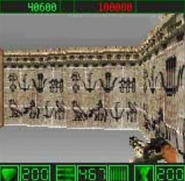 Early version of the minigun being used against Kleers. In this screenshot, the cut LCD screen can be seen.