The XL2 Lasergun (Laser Cannon in Serious Sam's Bogus Detour or simply Laser) is an experimental energy weapon that was created via reverse engineered energy weapons that are used by Mental's Bio-mechanoids.

The XL2 is still in early development, but initial field tests have been more than promising, hinting at a versatile weapon fit for many combat scenarios.

The XL2 has four barrels (two in Serious Sam's Bogus Detour) which fire in rapid succession, allowing the weapon to deliver a sustained barrage of “slowlight” laser pulses without running into danger of overheating. The body is entirely made of titanium which, in addition to being lightweight, further contributes to alleviating the common overheating problem that traditional laser weapons all too often face. Its revolutionary anti-recoil technology manages to completely eliminate the kickback caused by other slowlight launchers, making the XL2 precise and easy to use.

The lasers fired by the lasergun are projectiles, so it takes time for them to reach a target.

In Serious Sam 4, the lasergun behaves slightly different; continously firing the weapon will heat up the lasergun and increase its damage output, dealing twice as much damage as the projectiles did in the previous games. Its initial damage output is 50% higher than in previous game as well, dealing a base damage value of 30 per projectile and going to a maximum of 40.

The lasergun is a quite rare weapon, and often doesn't appear until the mid to late stages of the games it appears in.

It is worth noting that unlike previous games, the lasergun appears exclusively as a secret weapon, and not a regular weapon the player would normally find without secrets. It's because of this, its ammunition is also limited by how many secret electricity cells, or spare secret laserguns the player comes upon. On the other hand, if the player conserve its ammo and picks up all secrets that relate to it, they can reach its maximum ammo capacity part way through either Unearthing the Sun, The Guardian of Time, or Broken Wings (the latter only in Serious Sam Fusion as it has a new Fusion-exclusive secret containing 200 electricity, which will spawn an Adult Arachnoid once the ammo has been collected). In Jewel of the Nile, Sam first obtains the lasergun inside a Sirian chamber within the tomb of Isis in Gathering of the Gods. Unlike the main campaign, ammo for the lasergun is far more abundant in Jewel of the Nile and appears along with other types of ammunition.

The lasergun is first acquired in Knee Deep in Sand, and then it appears for the second time in the later portions of the game.

In the Bright Island campaign, the lasergun is first found in Forlorn Ruins, but can be found earlier as a secret in Crystal Cove.

The lasergun, unlike its previous incarnation, is no longer found in secrets, though it is still quite a rare weapon. It is first obtained in In Carcassonne, and then for the final time in From Earth With Love.

The XL2 does not officially appear in Serious Sam: Siberian Mayhem, having been replaced by the XPMR "Burner" Raygun. However, it is usable in the moddable version of the game and functions exactly the same as its Serious Sam 4 counterpart.

This upgrade is obtained as the player progresses through the game. 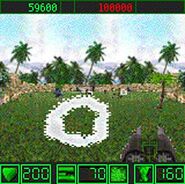 The lasergun's death ray in action.