The Wolfinator is the final boss of Serious Sam Advance.

The Wolfinator is a bipedal creature with a wolf's head. Presumably, it was responsible for Sam Stone being teleported to Ancient Rome after defeating the Sirian Sphinx.

It is found in Caesar's Palace, the last level in the game.

The Wolfinator's primary attack is firing electrical orbs at the player. These orbs will split into three orbs when it reaches the middle of the room. Its second attack is summoning Gunrillas to attack the player after a certain amount of time has passed.

The Wolfinator's head collapsing off his body after killing him. 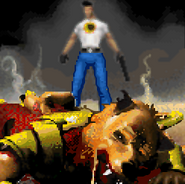 Image displayed showing the Wolfinator's death in the final "cutscene".

NETRICSA icon of Wolfinator, image is unused and can only be found in the game's files.