Not to be confused with the Scythian Witch-Harpy.

The Witch-Bride of Achriman was originally a sorcereress of the Great Council. Faced with destruction at the hands of the legendary evil known in their language as Khad Shain, they arranged an alliance with Lord Achriman, Ruler of the Shadow Plane, but were deceived by him and overwhelmed by his dark powers. They first appear in Serious Sam 3: BFE as a boss, and then as regular enemies later in the game and in Serious Sam 4 and Serious Sam: Siberian Mayhem.

Having been manipulated by Lord Achriman and made to work for their enemy against their will, they are known as "Witch-Brides of Achriman", and serve as troops in Mental's army as well as Lord Achriman's puppets. Witch-Brides are now trapped in an eternal semiotic limbo between the physical world and the Shadow Plane. They shift between limnial states, using their pyschokinetic abilities to attack their opponents.

Witch-Brides are not very common throughout the games they appear in. When they first appear, they serve as a boss. After the player kills the boss version, they will soon be encountered as regular enemies later in the levels, often to distract the player while they are busy attacking other enemies.

In Serious Sam 3, the Witch-Bride is first fought as a boss in The Dark Bride. Later, they often appear one or two at a time. Many Witch-Brides are encountered in the later levels, most notably in The Last Man on Earth and The Guardian of Time.

In Serious Sam 4, the Witch-Bride first appears as a miniboss in Gates of Hell and then later on scattered through the levels. She is about as common in this installment as she is in Serious Sam 3. When Witch-Brides are encountered, they either appear alone or in groups of two or three.

As Witch-Brides are trapped between both dimensions, the real world and the Shadow Plane, they have to shift between limnial states in order to use to cast their psychokinectic spells. Their spells allow them to warp space in order to protect themselves, hurl projectiles or crush their enemies. In order to use her spells, however, she has to temporarily shift into physical existence, which makes her momentarily vulnerable. Between attacks, a Witch-Bride will phase out of reality and teleport to a different location nearby. She can also use her tentacles to deflect incoming projectiles including bullets and explosives, which detonate harmlessly in front of her.

Her attacks vary depending on the game that is being played on. In Serious Sam 3: BFE. the Witch-Bride can use her powers from afar which does minor damage over a short period, or use them at close range to deliver a powerful ranged grab that will pick the player up and crush them, doing moderate damage and restricting aim speed. In Serious Sam VR: The Last Hope, her behavior is a lot different and she does not have invulnerability or block attacks. Instead, she will toss several projectiles at the player and teleport around more frequently. In Serious Sam 4, she can use her powers to throw debris at the player which deals a fair amount of damage. 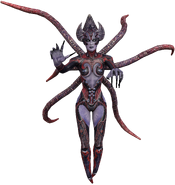 The boss Witch-Bride from another view.

A screenshot showing two Witch-Brides in the background.