"And that's how we do it on planet Earth you overgrown space cockroach."
―Sam to Ugh-Zan IV after killing him.[src]

Ugh Zan IV is the fourth incarnation of the legendary Ugh-Zan dynasty, and one of Mental's loyal servants, serving as a general in Mental's army. He is the final boss of Serious Sam 3: BFE and Serious Sam 3 VR: BFE.

Ugh-Zan IV is alleged to be the biological father of Ugh-Zan III, a paradox attributed to an accident with an experimental time-machine. He is a very large creature, with four arms (two natural arms and two augmented ones) and four large legs, which serve as a bio-mechanical quadruped which act as a base replacing the legs.

During the fight, he will be constantly surrounded by Mental's forces (Khnums, Major Bio-mechanoids, Minor Bio-mechanoids and Technopolyps) and will spawn in reinforcements until either he or Sam is dead. Periodically, he will wrestle with the Sandwhale.

Like Ugh-Zan III, Ugh-Zan IV can move quite fast, despite his size. He can also spin quickly on his cybernetic base, allowing him to deal with threats who may be trying to attack the vulnerable weak spot on his back.

His primary attacks are firing wide, fast-moving projectiles, that while easily dodged, do a considerable amount of damage. He will stomp on the player at every opportunity at close range. He's generally not considered as difficult as Ugh-Zan III.

He has very high health regeneration that increases the lower he is on health, and while regenerating, he is immune to the player's weapons. 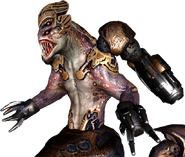