Ugh-Zan III, also known as The Vicious Warlock, was one of Mental's generals, ranking as Great Admiral in Mental's army. He had served Mental for millions of years. He is the main antagonist and final boss of Serious Sam: The First Encounter (including the Xbox port and HD and VR remakes), Serious Sam: The Random Encounter and I Hate Running Backwards.

Ugh-Zan III was the third incarnation of the vicious Ugh-Zan dynasty, the last of a mighty and powerful species called the warlock giants who were feared throughout the universe.

During the events of Serious Sam: The First Encounter, Ugh-Zan III was sent to Earth by Mental to supervise the final assault on the human race and as part of a last-ditch effort to prevent Serious Sam from boarding the SSS Centerprice.

As large as a mountain, armed well enough to confront an intergalactic cruiser, and endowed with unseen magical powers and the ability to regenerate, Ugh-Zan III was one of the most dangerous creatures in the universe. Appearance-wise, he is a huge creature, with four arms and large, hooved feet. He also had two curved horns protruding from his head, similar to that of a Khnum. Unlike his father, Ugh-Zan IV, he did not have any cybernetic parts or a bio-mechanical quadruped base for his legs. Ugh-Zan is unusually fast for his size, and was able to catch up easily with Sam while he was running away from him.

During the fight with Sam, Ugh-Zan would either use his four weapons against him, or launch homing fireballs from his mouth. His weapons were very powerful and far more superior than the weapons seen being used by the troops in Mental's army. His four weapons included a rocket launcher, a beamgun, laser gun and lava launcher. He regenerated when he has about 5% health left (when the life bar turns red and is nearly empty). If Ugh-Zan was hit by the SSS Centerprice's laser beam, he would be stunned, disabled, immobilized, and unable to heal for a short duration of time.

Ugh-Zan III is first seen emerging from the large arena that Sam was at after decimating massive hordes of Mental's forces. He destroys some buildings in a rampage and makes his way towards Sam while Mental sends some of his forces along with Ugh-Zan to stop Sam. Ugh-Zan is able to catch up with Sam as he makes his way to the Great Pyramid. Once Sam makes it to the pyramid, Ugh-Zan begins attacking him with his weapons. Sam is able to hold him off for a while (despite not being able to damage him) until the pyramid doors open. Once inside, Sam faces Ugh-Zan for the last time and succeeds in activating the SSS Centerprice's beam to deplete Ugh-Zan's health before defeating him with his weapons. Once Ugh-Zan has been defeated, Sam boards the Centerprice and departs to the planet Sirius.

Ugh-Zan III first appears in level 3-1 when Sam and his teammates exit the temple, expecting to find his master Mental instead. As they approach the pyramid Ugh-Zan III shows up behind them and gives chase, only stopping after they crossed a lake. Sam and his teammates go up the stairs of the pyramid and discover that its top is a spaceship. After activating four switches, Ugh-Zan III once again appears in the middle of the level and forces the heroes to confront him as the final boss. In battle, only his massive hoof is visible stomping towards the heroes, though he doesn't actually possess any attacks of his own. Instead the true battle is against the legions of minions that constantly spawn, meaning that Sam and his teammates have to defeat Ugh-Zan quickly before they are completely overrun.

His defeat causes Ugh-Zan to engulf the ship in a massive explosion, the three heroes jumping out as the flames burst out behind them. The game then abruptly ends and unlocks Endless Mode.

In I Hate Running Backwards, Ugh-Zan was combined with the remains of Hugo and transformed into a gigantic mech. In the plot, he has been sent to the future to stop Sam and his friends in fighting Mental and his forces. Ugh-Zan's mind was uploaded to the new mechanized body and he can also transfer it to the tank module that is stored inside his body as a last defense mode. 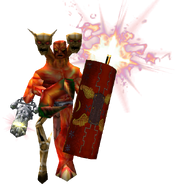 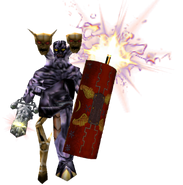 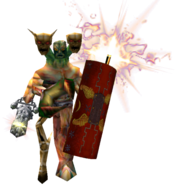 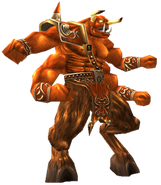 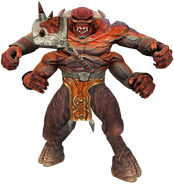 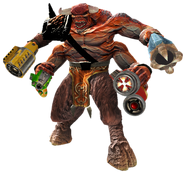 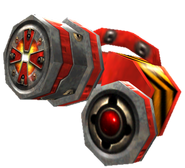 Ugh-Zan in I Hate Running Backwards.

Ugh-Zan III as he appears in the anime Hayate No Gotoku.