The Technopolyp is the product of an attack helicopter that has been infected with colonies of minute cyber-parasites, most likely a more complex cluster of protopolyps, and almost certainly related to the kind employed to convert humans into Processed Anthropolyps.

The Technopolyp is an obscure species whose origin is not well known. However, its ability to hijack machinery suggests that it was most likely genetically engineered as a biological weapon by Mental to use in his army during the Mental War and for the need of improved air support.

The colonial organism consists of a huge number of individual microscopic organisms, called zooids, that can reproduce and reconfigure the super-organism as needed. This enables it to quickly adapt to any host machine and to repair damages to the organism itself, or to the host machine, during battle. Due to the helicopter's armor, Technopolyps can endure multiple hits from rockets and other explosive projectiles and take a substantial amount of damage from bullet-firing weapons before being destroyed. They can, however, be instantly taken down with a cannonball fired from the SBC Cannon.

Aside from the helicopters that Technopolyps are seen attached to, it is possible that they can fuse with other military vehicles as well, such as APCs or tanks, but so far they have only been seen hijacking helicopters.

Technopolyps, like other air units in Mental's army, are usually deployed to locations where air power is more convenient for dealing with an enemy threat, or for wiping out groups of resisting human forces. If the enemy proves to be tough to deal with, more Technopolyps may be required.

In their appearances, Technopolyps are seldom seen and are not usually encountered until the middle to late portions of the games they appear in. In Serious Sam 3: BFE, the first Technopolyp appears as a boss in No Place to Hide after taking control of Garret's helicopter. Afterwards, it appears sparingly, usually one or two at a time. During the fight with Ugh-Zan IV, Technopolyps appear more frequently to assist him, and will keep spawning until Sam or Ugh-Zan is killed.

In Serious Sam 4, the first Technopolyp encountered appears in When in Rome, and then appearing every now and then throughout the levels.

The creature attached to the helicopter has no weapons of its own, but it can utilize the machinery it has hijacked and make use of its weapons (if it has any) against their opponents.

When engaging the target, the Technopolyp will fire either the helicopter's machine guns or rockets. The bullets they fire, at first, have low accuracy, but will become more accurate after a few rounds are fired. Their rockets are much harder to avoid due to their blast radius, especially in Serious Sam 4, since they actually home in on the player compared to the ones they fire in the previous games.

The Technopolyp has advanced AI compared to other enemies, and will fly around when not shooting, which makes it harder to hit with slow projectiles. However, it will not move while it is firing the helicopter's weapons.

In Serious Sam VR: The Last Hope, Techopolyps die instantly rather than have their helicopter circle around for a brief period of time before exploding. 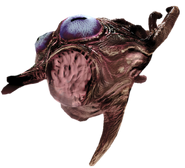 Rocket fired by the Technopolyp.