Atari
Gamecock
T.E.O.R was a first-person shooter video game that was developed by Croteam and was to be co-published by Gamecock and Atari before its cancellation in 2008.

Development on T.E.O.R lasted from March 2006 to February 2008. It was first revealed to the public in May 2007 as a then-untitled military game with only a few screenshots accompanying it in the Croatian game magazine GamePlay.[1] It was supposed to ship in 2009 but was canceled by Atari after the pre-production cycle, resulting in the layoffs of several Croteam employees.[2]

T.E.O.R appeared to be a somewhat realistic FPS game developed by Croteam for the now-defunct game publisher Gamecock. How the actual gameplay would work was unknown, as the game was canceled before details were released. A Black Hawk, Humvee and Abrams tank appeared in screenshots, hinting that vehicles were to play a role, even if they were just NPCs.

Screenshots show that the game would take place in modern-day Somalia, as depicted by the destroyed Middle-Eastern buildings in the handful of screenshots released. There would also be a ruined office building somewhere in the game.

A magazine article that unveiled Serious Engine 3 showed off several weapons for the then-unnamed game.

In addition, some unused animations for a model in Serious Sam 3: BFE suggest that a G36 and AT4 were usable at one point.

T.E.O.R was scrapped because investors and publishers decided to pull the plug on it. Since Croteam was doing it on a “work-for-hire” basis, they resumed work on other projects after this game was canceled.[3] However, it served as an excellent example as to what Serious Engine 3 was capable of, several years before Serious Sam 3 came out.

The AK-47's magazine model and weapon texture appear in Serious Sam HD's game files but have no connections to anything in the actual game. They are most likely leftovers from T.E.O.R.

A model named "gunner_01.mdl" in Serious Sam 3's files has animations named "idle_scar", "idle_at4" and "idle_g36". These appear to be leftovers from T.E.O.R, as a screenshot of it featured a SCAR-H. 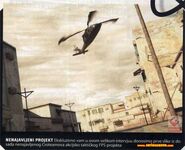 Building with a soldier in it.

Damaged street with an M1A1 Abrams in it.