Admir Elezović
The T-Mech is an enemy that appears in Serious Sam 2. It is essentially a copy of the Major Bio-mechanoid with the head of a Tyrannosaurus rex smoking a cigarette and a Chinese dragon's moustache.

The T-Mech is the son of the Major Bio-mechanoid. It swore revenge against Serious Sam after he killed the T-Mech's dad in Serious Sam 1. Originally slated to not be in the game, the T-Mech managed to bribe its way into the game, but only on the condition it got a facelift.

T-Mechs are first encountered on planets M'Digbo and Magnor, the latter where they first appear as actual enemies in Deadwood. They then appear somewhat frequently from the Kleer planet onwards. Lots of T-Mechs appear in the final level.

In-game, the T-Mech behaves pretty much the same as its Serious Sam 1 counterpart; it will walk towards the player and fire one rocket at them, then fire another almost immediately after. After two rockets have been fired, it will have a cool-down period before firing the rockets again. However, the T-Mech's rockets are actually weaker than the Major Bio-mechanoid's, dealing only 20 damage with a direct impact alone as opposed to 100 for the Major Bio-mechanoid. Both still deal the same 50 splash damage though.

Pre-release screenshot showing a completely different design for the T-Mech. 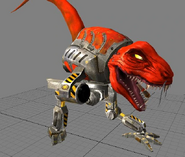 Rocket fired by the T-Mech.