The Subterranean Hydra Emperor is a boss that appears in Serious Sam: Next Encounter.

The Subterranean Hydra Emperor is a beast that lurks underneath the Ancient Palace. Someone modified the Hydra's heads with modern technology, such as adding a laser gun and a rocket launcher.

Each of the Hydra's heads use different attacks; the blue head fires laser projectiles from its cannons and sweeps the area with a laser from its head, the skull head fires drill-like rockets, and the red head sprays fire everywhere. After attacking the player for a bit, the heads will retreat and reappear in different areas. 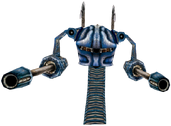 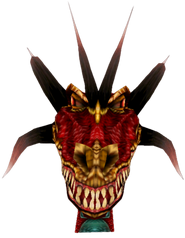 Skull head.
Add a photo to this gallery

Retrieved from "https://serioussam.fandom.com/wiki/Subterranean_Hydra_Emperor?oldid=31353"
Community content is available under CC-BY-SA unless otherwise noted.