The Spider Mechanoid is an enemy that appears in Serious Sam 2. There are two variants of Spider Mechnoids, with different types of attacks.

The Spider Mechanoid is a genetically engineered organism that was created in Mental's laboratories. There are two classes of Spider Mechanoids. One that acts like a spawning mechanism, simply called "The Mommy," and a smaller, weaker one that is used for infantry. The smaller ones usually attack in groups.

The Spider Mechanoid first appears at the end of Road to Ursul, where multiple large Spiders appear.

The insides of Spider Mechanoids are filled with poisonous acid, and the web they eject can be lethal if you receive multiple shots. They are very quick, but the downside is that they have no armor.

On the other hand, the bigger ones will be tougher to bring down. Their bodies are waxed with a big layer of ant acid, so every metal object that hits them is soon disintegrated, leaving only small amounts of damage. The large Spider's projectile is programmed to intercept the player if they are strafing in a certain direction. 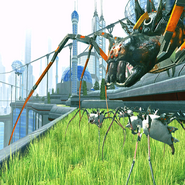 Spider Mechanoids in Siriusopolis.
Add a photo to this gallery

Retrieved from "https://serioussam.fandom.com/wiki/Spider_Mechanoid?oldid=52669"
Community content is available under CC-BY-SA unless otherwise noted.