The Sirian Werebull is a very dangerous and fast enemy that primarily attacks by charging into the target and ramming it with their horns. It is the fastest land-based enemy in the series.

The Sirian Werebull is a strange hybrid that was created by crossbreeding Sirian DNA with an unknown species of cattle. They have two hands on their front legs, and hooves on their back legs. Unlike normal cattle, Werebulls have sharp teeth similar to that of a carnivore.

In all their appearances, Werebulls are fairly common enemies and first appear sparingly, and then in large groups in the later levels to make gameplay more challenging. They are more common in Serious Sam 1 than in Serious Sam 3: BFE and Serious Sam's Bogus Detour, but they are encountered more often in Serious Sam 4.

Behavior-wise, the Werebull behaves just like an ordinary bull. They are very aggressive and dangerous, and will begin charging towards the target as soon as they see them. They will not stop chasing their prey until the Werebull or the target has been killed or if the Werebull loses sight of them. A Werebull will even charge through Mental-affiliated units and ram them out of the way, just to get to the player. Its horns are its only defense, but this does not mean that the Werebull is an easy opponent; the horns are razor-sharp and the animal can build up considerable speed during its characteristic attack charges.

In-game, the Werebull has medium health and is one of the fastest enemies, making them a dangerous foe. The Werebull's health allows it to endure several hits from most weapons before dying. Its two attacks that consist of ramming the player, which causes the player to go flying into the air, or if the player is not fast enough, it will attempt to gore the player with its horns, causing the same damage as a ram would. The Werebull is capable of throwing the player over walls using its horns. Occasionally, the player may end up getting stuck in an inaccessible part of the map, which can sometimes result in having to reload to the last save point. Worse, a Werebull can send a player falling to their death.

In The Second Encounter in The City of the Gods, there are several Werebulls armed with cannons that will fire a volley of fast cannonballs at the player. These cannonballs are very hard to dodge and deal massive damage, if not kill and gib the player outright, although there is a chance that these Werebulls may kill themselves instead, particularly if the player lures one towards them and against a wall. This is the only level where they use cannons.

In Serious Sam 4, the Werebull can be ridden by the player if they have unlocked the respective skill in the S.A.M. system. When riding a Werebull, the same controls for riding a vehicle apply to the Werebull. The player can also fire their weapons from the Werebull while riding it. Like other mountable enemies, the Werebull's health will be displayed by a HUD icon on the bottom-left corner of the screen. Once the Werebull is dead, the player will be dismounted from it. 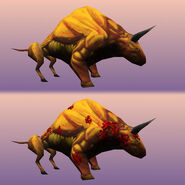 Concept image of how damage taken looks on an Alpha Werebull.

The original Croteam banner with a Werebull puncturing through.

A gif of a Werebull from the first Croteam website.

A render of a Werebull bleeding. 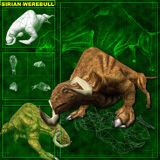 Concept art of the final model. 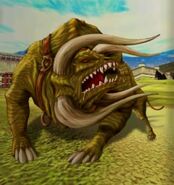 A beta Werebull charging at the player.

A montage showing a beta version of Karnak. The Werebull can be seen multiple times.

A Werebull glitching through a door in a Test 1 screenshot. 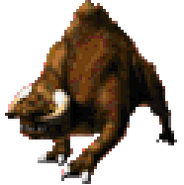 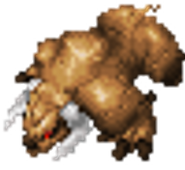 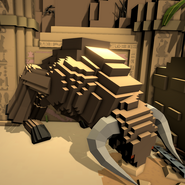 A Werebull charging at Sam in a pre-alpha screenshot.