The Shofield Uzi Pistol is an automatic submachine gun that appears in Serious Sam: Next Encounter. It is based on the actual Uzi Pistol, a semi-automatic pistol variant of the Uzi.

The Shofield Uzi PistoL is a 9mm Uzi submachine gun that was manufactured by Shofield. It is designed with its “Spray and Pray” technology, allowing the user to quickly unload many bullets at targets. However, the Uzi pistols have low accuracy and consume a lot of ammo quickly, making its use somewhat limited when compared to its big brother, the XM4000 Minigun.

The Uzi Pistols can use ricochet rounds, making them more useful than other weapons for clearing out a tight room or corridor that is filled with enemies. Bullets that do not hit a target can ricochet and hit enemies that are nearby, making it very effective at clearing out enemies that are behind other enemies. The player can switch between ricochet and normal ammo types with the use key. 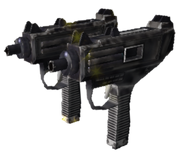 HUD icon.
Add a photo to this gallery

Retrieved from "https://serioussam.fandom.com/wiki/Shofield_Uzi_Pistol?oldid=46411"
Community content is available under CC-BY-SA unless otherwise noted.