Serious Sam Early Build is the period where Serious Sam was supposed to be a much bigger game than it turned out to be. Back then, it was known as Serious Sam Alpha. Generally, this period is between the development of In the Flesh (1996) and Test 1 (2000). The game was supposed to have much more levels, more enemies, and more weapons. The Serious Engine was the same in all the periods in development, they just updated the engine from S-Cape 3D to Serious Engine 1.

The storyline and level progress would be different as it is now in Serious Sam 1. Sam would start out in a city, specifically, City Enter, which would probably be a mix of Dunes, Suburbs, and Metropolis from the final game, later used in Legend of the Beast DLC for Serious Sam HD: The Second Encounter. After the player has completed the City levels, they'd find himself in the "Tomb" levels. Tomb of Menes, Tomb of Ramses II (which would probably be similar to Tomb of Ramses III), and a level named "Secret Tomb". It's unknown if it would be an actual secret level, like Moon Mountains and Sacred Yards.

After the player completed the Tomb levels, they will be in Karnak, which would be split into four parts: Enter, Enter Complex, Lake & Alley, and Temple. The Enter level would probably be like the start of Karnak from the original game, with a few more features while Lake & Alley would probably be the Ankh Pool section of the map. After completing Karnak, the player would go to a level called the Babilon Temple. "Babilon" means Babylon in the Croatian language. However, it's unknown what Babylon has to do with the Ancient Egyptian levels. After the player has completed the "Babilon Temple", they will teleport to "Pyramid Valley", which would probably be the Great Pyramid level from the final version of the game.

Instead of ending the game like in the final version, the player would travel into 6 different planets: the Water Planet, Lava Planet, Green Planet, Ice Planet, Tropic Planet, and Rock Planet. Many various elements were to appear in those planets, including Lava Golems in the Lava Planet. Their coding is still left in the SDK of the final version of the game.

After completing all the planets, the player would be in a level called Space Crusader, which probably is related to being on a space station, as there's a screenshot from earlier versions of the game showing a space station. Sirius follows after the Space Crusader level of the game, which seems it would introduce inverted gravity and platforms, which easily explains the custom gravity coding in the final version of the game, as it was intended for the planet Sirius, not Egypt.

The game would end with a set of 3 "Grand Finale" levels. There, Sam will finally meet and fight against Mental

The 3 Deathmatch maps were named "Sky", "Den", and "Elf", the Capture the Flag and King of the Hill maps were unnamed.

As seen in below, in the first picture of the gallery, the would be more colorful compared to the final version of the game, which was only green.

The colored HUD came in 1998 with changing name from In The Flesh to Serious Sam.

There were 4 weapons that were under development during the Early Build that are absent from the final version of the game. The Ghostbuster would emit a beam that would damage enemies (technically, the beam was only there for visual reasons, the damage was dealt by invisible bullets), the Pipebomb was a hand-held explosive, which could be thrown and remotely detonated or detonated when an enemy steps on it, much like a grenade. The Flamer would most likely behave like the Flamethrower from The Second Encounter. At some point, there was also supposed to be a "Lava Rocks Gun", which was supposed to shoot small hot rock projectiles, but was scrapped because its firing characteristics were too similar to the XL2 Lasergun.

There is a total of 15 enemies in the early build that are absent from the final version of the game.

An early version of NETRICSA from the Beta.

Early model of the pump-action shotgun, as seen in Karnak.

An early model of the double barrel coach gun.

Early build of the Temple of Hatshepsut.

A screenshot showcasing some scrapped weapons and levels. The weapon on the top left is the pipebomb, on the top right is the minigun, and on both bottom pictures the weapon is the Ghostbuster.

An unknown location in Sky City.

A possible screenshot of Sky City.

Sky City, a level and location on Sirius.

A space station, apparently, orbiting around Sirius. And maybe the "Space Crusader" level?

An unknown destination of Sirius in the chapter Sky City.

An unknown destination of Sirius in the Sky City chapter.

Sam holding and using the Ghostbuster in an unknown destination on Sirius, in the Sky City chapter. 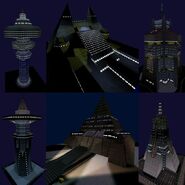 A space temple/structure/headquarters, most likely located on Sirius.

Sam, wielding a minigun, and figthing some Ice Elementals of various sizes (left image) and a location of Ice Planet (right image). 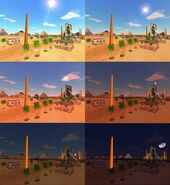 Croteam's demonstration of their day-night lightning. Also possibly a screenshot of the Nile level.

Another part of the Ice Planet.