Serious Sam 2 is a first-person shooter video game released for Microsoft Windows and Xbox. It was developed by Croteam and was released on October 11, 2005. The game was initially published by 2K Games,[1] and was later distributed via Steam on January 31, 2012. While the game was originally released only for Windows and Xbox, an unofficial Linux version of the game was created and is being handled by Linux installers for Linux Gamers.[2]

The game uses Serious Engine 2, the successor to the previous game engine, Serious Engine, and the engine is capable of many features of other advanced game engines of the time including high dynamic range rendering and light bloom. The engine supports integration with both Xfire and GameSpy Arcade for multiplayer match finding. Serious Sam 2 is the only game to use the proprietary engine, though the Serious Engine 2 is available for licensing.

The game's story picks up shortly after the end of Serious Sam: The Second Encounter, with Serious Sam continuing his goal to defeat his arch nemesis, Mental. The game begins with Sam being summoned before the Sirian Great Council, where the Council provides him with guidance on how to accomplish his goal to defeat Mental.

The Council reveals to Sam that he must collect all five pieces of an ancient Medallion, each held by various groups on five different planets, and states that once Sam has the entire medallion, Mental will be vulnerable. All the planets (except the planet Kleer) are populated by friendly, bobble-headed humanoids, but the problem is that all the planets are under Mental's control. The Council instructs Sam to visit all five planets in order to recreate the medallion, only then will Sam become "The One". Confused at the moment and with nothing better to do, Sam accepts the mission. When the medallion is finally complete, Sam will then be ready to begin the final assault against the greatest enemy of humanity: Mental, who is located on Sirius, once the planet of the great Sirians that visited Earth many times, now the domain of Mental himself. But in order to gain access to Sirius, Sam is asked to storm Kronor, a moon orbiting Sirius that has a massive cannon which could be used to remove the protective shield on Sirius, which was a last line of defense for the Sirians against Mental. And so, Sam's mission continues. He ends up in a thriving megacity called Siriusopolis, the city in which Mental is hiding. From there, Sam battles more of Mental's hordes until he reaches the Mental Institution, Mental's home, after disabling it and into Mental's throne room.

Sam finally encounters Mental in person while the lights are off. Mental tries to reveal to Sam that he is his father, but Sam interrupts by shooting him, thus silencing Mental forever. After that, the Sirian Great Council, even the inhabitants from the planets, celebrate their long-awaited victory against Mental. When the lights come back on however, it is revealed that Mental wasn't there at all and it was instead just a speaker attached to Mental's throne, implying that he actually tricked Sam in order to escape in his starship into deep space (in the Xbox version, the game doesn't show this scene). The credits roll after that, where a dialog of three unknown people is played discussing how this ending might just be another one of Croteam's bad jokes and how big Mental's boss fight could be.

After the credits, a silent-motion scene shows Sam returning to the Sirian Great Council with the medallion in hand. As they take the medallion however, Sam soon discovers that the Council had cardboard boxes full of the medallions. Sam then becomes enraged and chases the Council around their room for making him risk his life for something they already have.

In the single-player campaign, the player assumes the role of Serious Sam in his adventures against the forces of Mental, who seeks to destroy humanity and all other intelligent life. The game pretty much functions the same as its predecessor, but has a different art style, remodeled weapons, and vehicles.

Without using cell shading, the textures and models used in Serious Sam 2 result in a much more cartoon-like version of the universe as portrayed in other games of the series. Serious Sam 2 is the first game in the series where the story travels to worlds other than Earth, resulting in much more varied environments, and the result is a stark contrast in overall visual style to the other games in the series, most notably Serious Sam 1.

Enemies are much different as well. Only a handful of enemies from the previous games appear; the Beheaded Kamikaze, Kleer Skeleton and the Harpy being the ones that survived during the events of Serious Sam 1. The rest of the enemies are all new. A notable change between Serious Sam 1 and Serious Sam 2 is that Serious Sam 2 has enemies that fit the theme of a level, such as how Centaurs appear only in the fairy tale-themed world, or the Martial Arts Zombie appears in the Chinese-themed world. Most of these enemies behave like enemies that appeared in Serious Sam 1 (i.e. the Martial Arts Zombie behaves like the Kleer Skeleton, and Marcel the Clown behaves much like the Kamikaze), so the differences aren't as startling as they first appear.

The tone of the game is much more humorous that before. Each level has a cut-scene that has at least one joke or humor instance in it, and even events that should be taken seriously are played for laughs.

The power ups and items from Serious Sam 1 appear in the game, but also included are new score items, which give the player a certain amount of points when picked up. These items include a coin, a sack of money and a treasure box, each giving away more points than the previous item. Most of these items are hidden in secrets and destroyable items, such as statues and crates.

The biggest addition to the game are vehicles. While they first appeared in Serious Sam: Next Encounter, they made their first debut in an official game in Serious Sam 2. Various levels allow the player to pilot various vehicles, such as a flying saucer, a helicopter or a hovercraft. There are also with various guns attached to them the player can man in order to get some extra firepower during sections of the game.

Single-player in Serious Sam 2 is the exactly same as in Serious Sam 1; the player must go through a level and eliminate all enemy forces until they reach the end of the level. When the player completes a planet, they are stripped of all their weaponry and must get replacements in the first level or two. Some attempts at spicing up the gameplay can be seen, such as the player going through an obstacle course and defending an important NPC from enemies, but these never deviate too much from the core gameplay.

Serious Sam 2 featured only co-op when the game first was initially released. A huge change between Serious Sam 1 and Serious Sam 2 is that players must use lives like in single-player. The lives themselves are shared between players; if someone dies and re-spawns, then a life is taken from everybody. If all of the lives are gone and everybody has died, the level must be restarted. Most servers these days exploit this by editing the game so that it offers the players a huge amount of lives, making it almost impossible to run out of them.

A patch added deathmatch mode. Serious Sam 2 has a rather poor net-code, which made deathmatch difficult to play, which, along with the community's preference for co-op over deathmatch, made it dead in the water when it was released.

The only way to play offline multiplayer modes is via LAN, as split-screen has been removed from Serious Sam 2 in both the PC and Xbox versions of the game.

Development of Serious Sam 2 began right after the Xbox version of Serious Sam 1 was completed. [3] The team decided to develop Serious Engine 2 for SS2, which increased development time, but would make the game look better.

Serious Sam 2 was first revealed via a tech demo at Games Developer Conference 2004, showing off the features in the new Serious Engine 2. The press responded very favorably, which was encouraging to the developers. Croteam updated their website up to August 2004, updating people about the improvements Croteam had done to the game and its engine. Then, they went quiet for a long time because their publisher put a gag on new SS2 info.

In 2005, 2K Games, the publisher of Serious Sam 2, officially announced the game and said that Serious Sam 2 would appear at E3 2005, which got people interested in the game again.

As expected, the game appeared at E3 2005 showing off two levels; one showing ChiFang, with the other one showing Siriusopolis, along with screenshots showing off various levels in the game. Like the GDC 2004 presentation, press reaction was positive.

Unlike the game's predecessors, The First Encounter and The Second Encounter, the first of which was awarded GameSpot's PC Game of the Year in 2001, Serious Sam 2 was less praised by game critics. The game's average review is 75%, according to GameRankings.[4] Its highest mark by mainstream media was a 4.5/5.0 from Computer Gaming World, though most reviews were in the 70% or 80% range. Other notable reviews include GamePro rating it 4/5 and GameSpy giving it a 3.5/5.[5] IGN also awarded Serious Sam 2 an 8.2/10.[6]

Serious Sam 2 was criticized by some people for being less "serious" and a lot more "cartoony" than Serious Sam 1.[7] An over-emphasis on reflective surfaces and oddly out of place pixel shading were perceived as being more about showing off the capabilities of the game engine than about defining the atmosphere of the game. Lighter colors and a more upbeat soundtrack made the game feel less grounded in reality, contrary to the realistic Egyptian tombs and Mayan pyramids of the earlier games, and players complained that while the weapons of the previous games seemed to be massive and powerful, those in Serious Sam 2 were less so.[8][9][10][11] 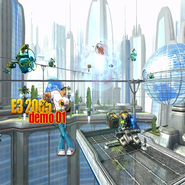 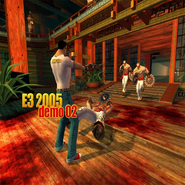