Serious Sam: Xbox is a first-person shooter video game developed by Croteam and published by Devolver Digital. The game is a port of Serious Sam 1 to the Xbox.

For instance, there is a "multikill" system, which multiplies your score if you kill multiple enemies with a single shot. (x1 multiplier for each enemy killed) The more multikills you do in a short period of time, the higher the multiplier. Other features include a life system, which re-spawns you in place when you die, and auto-aiming. The player can access multiplayer via system link and split-screen.

The player can also align their favorite weapons to the X and Y button by selecting a weapon and holding X or Y, then press X or Y again to select that weapon. 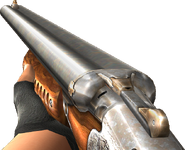 Weapon selection displayed at the top right corner of the HUD.

An example of the 'multikill' system.
Add a photo to this gallery
Retrieved from "https://serioussam.fandom.com/wiki/Serious_Sam:_Xbox?oldid=50459"
Community content is available under CC-BY-SA unless otherwise noted.