Instant death to all non-boss enemies in range

The Serious Bomb is a handheld explosive that is featured in many Serious Sam games. It happens to be the main logo when referring to the Serious Sam series, appearing most famously on Serious Sam's shirt in virtually all of its appearances.

When the fire key is pressed, the serious bomb will take a few seconds to warm up, and then it will explode, killing every non-boss enemy within a 750 meter (in-game) radius of the player.

The serious bomb is absent from Serious Sam 3: BFE, Serious Sam 3 VR: BFE, and Serious Sam 4, being replaced by the C-4 Demolition Charge and Mini-Nuke instead.

Serious bombs are rare weapons and the player can only carry a limited number of them, thus they should be used sparingly and only as a last resort if the player is absolutely overwhelmed by enemies. They often appear before a big fight begins so that the player can stand a chance, should they be unable to fight a large horde of enemies at once.

In The Second Encounter, the first serious bomb appears in Valley of the Jaguar, while another one can be found behind a house near the 'bloodbath secret' in The City of the Gods. A few bombs also appear in The Pit. In later levels, serious bombs usually appear before a big fight begins.

In Serious Sam: Double D: XXL, the serious bomb can be acquired by by purchasing the Serious Bomb upgrade from The Trader using Cerebral Controllers. It is an upgrade for the LM32 Rocket Launcher and is unlocked after completing the game for the first time.

In Serious Sam: Tormental, the player can acquire a serious bomb by purchasing it from shops with keys. It also has a chance to appear from a blue Mental chest or after clearing a room full of enemies. 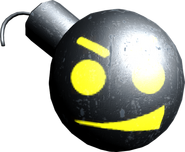 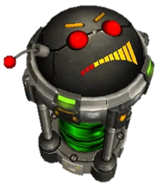