The Seagull Fighter is a bomber aircraft that appears in Serious Sam 2.

The seagull fighter is a bomber used by Mental's forces that was being developed on Magnor when Mental defeated that planet. He found it in a secret swamp base, and immediately manufactured it for himself when he saw that it could easily travel at warp speed and had stealth coating.

Seagull Fighters first appear in Riverdance, where one bombs an island that the player obtains the Double Shotgun on.

A weaker variant of this enemy is spawned by the Mental Institution.

A blue variety of the fighter exists, which is used by members of the Alliance.

The seagull fighter is armed with bombs that is uses to deploy on a specific location. These bombs do quite a lot of a damage, especially if multiple ones hit a target. 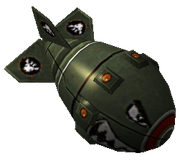 Bomb used by the fighter.