The Scythian Witch-Harpy is a female clone of a long-extinct Scythian race that was created by Mental. They have been trained in close combat and give the ability to cast combat spells at their targets.

First introduced in Serious Sam 1, Witch-Harpies are seen in many Serious Sam games throughout the franchise.

The origin of the Scythian Witch-Harpy is the subject of controversy in the scientific community, with some maintaining that it is actualy a creature belonging to the clade Ornithodira that evolved on Earth in the far past, while others classify it as an exo-mammal and theorize it may have evolved on Sirius. Their oversexualized appearance is mere mimicry, intended to attract and confuse less intelligent primates so they may be dispatched by the creature’s razor-sharp claws.

Harpies are quite common enemies when they appear, and are often positioned far away and in medium to large groups. Their main purpose is to distract the target while they are busy dealing with enemies on the ground. They can become a nuisance when they get close to the target in order to swipe them with their claws.

In Serious Sam: The First Encounter, Harpies are first seen in Oasis, but can appear earlier in Temple of Hatshepsut and Sand Canyon in secrets. In Dunes, a massive horde of Harpies will appear after the player picks up a secret health near some palm trees. In Serious Sam: The Second Encounter, Harpies are slightly more common than before. The first Witch-Harpies are seen in Sierra de Chiapas, after NETRICSA tells the player to shoot them down with the newly acquired RAPTOR Sniper Rifle.

In Serious Sam 3: BFE, Harpies are very rare, mostly appearing in Under the Iron Cloud and are not seen much after that. They do, however, appear in much larger numbers in the Jewel of the Nile levels.

In Serious Sam 4, Harpies become more numerous again. Several of them first appear in A Breakfast in France, and then they become much more numerous in In Carcassonne and later levels.

The Serious Sam 3 version of the Harpy has more complex AI than in the previous games. When they are first encountered, they can be seen sitting on top of buildings. If a Harpy is attacked, any Harpies nearby will come to her aid and attack the player. They also tend to keep their distance compared to Serious Sam 1, but they will still try to use their melee attack when they get the chance. Their hitbox is also slightly off-center, often causing them to get stuck.

In Serious Sam 1, if a Harpy is shot in the wings enough times, she will fall to the ground and continue attacking, then fly back up a few minutes later. 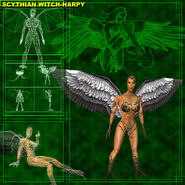 Early screenshot of Moon Mountains with a Dragonman and Harpies. 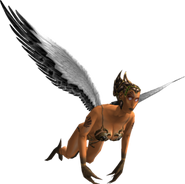 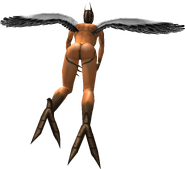 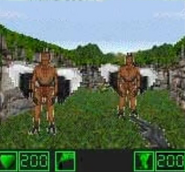 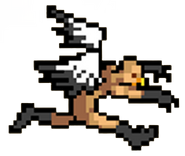 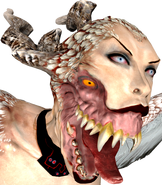 Close-up of the Harpy's face. 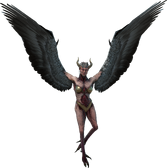 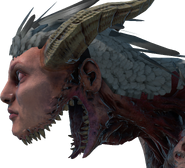