Scrapjacks are low-grade models of Mental's forces, created from crudely stitched-together and assembled body parts of killed soldiers. A Scrapjack has three selectable heads, which can exhibit various behaviors and make them a dangerous threat.

Three variants of Scrapjacks are known to exist. The common variety wields two rocket launchers, and a much larger version, known as Raahloom, wields a massive warhammer and a modified SBC Cannon. The Fattie Swallower is slightly larger than the regular Scrapjack, and fires large sawblades instead of cannonballs or rockets.

Scrapjacks are not usually as common as other enemies, and often appear in the later levels of whatever game they appear in. In combat, they usually serve a role of giving support to the main attacking force.

The first Scrapjack encountered in the game appears in Unearthing the Sun. Five more additional Scrapjacks appear later on the same level. As the player progresses throughout the game, Scrapjacks are encountered more frequently, and are usually present one to few at a time, although there can be more in the final level, The Guardian of Time, with at least a dozen Scrapjacks being seen.

In Serious Sam's Bogus Detour, Scrapjacks are encountered much earlier compared to other games, appearing as soon as the second level, though they are more uncommon than before. Scrapjacks are often seen surrounded by groups of weaker enemies.

In Serious Sam VR: The Last Hope, the player may encounter several Scrapjacks at a time. They are encountered in the mid to late levels of the game.

In Serious Sam 4, the first Scrapjack appears in Death from Above along with a squad of Octanian Gamma Troopers. In the later levels, they occur much more frequently, often in small groups and with hordes of weaker enemies.

Scrapjacks are deployed into areas where heavy enemy resistance is encountered by Mental's forces. The more resistance they encounter, the more Scrapjacks are needed. Like Adult Arachnoids, they are often used to support weaker troops and to provide covering fire with the rockets they fire.

Due to their sheer size and weight, Scrapjacks move very slow, often shaking the ground around them. A telltale sign that a Scrapjack is near is by listening to their heavy breathing and grunts, as well as the loud footsteps they make when moving. Their size and health allows them to endure multiple direct rocket hits, but can still be easily dispatched at a distance with concentrated fire from the M29 Infantry Assault Rifle, and even more easily eliminated by detonating a single C-4 charge that has been attached to their torso.

With three selectable heads to choose from, Scrapjacks show different behaviors, from bland attacking to berserking rage. Their firing patterns are very similar to the Zumb'ul; a Scrapjack will fire a rocket where the player currently is, and another where the Scrapjack predicts where the player's estimated direction is. The Scrapjack also has a "berserk" mode when it has been damaged enough. In this phase, the Scrapjack will rapidly fire missiles in a much faster, longer succession just as accurately as regular attacking, just like Major Bio-mechanoids. Scrapjacks also have a strong melee attack if the player gets too close. Scrapjacks can also fire rockets if there is an obstacle between a player and Scrapjack, even if the obstacle is indestructible.

In the Serious Sam Fusion version of Serious Sam 3, on Serious difficulty, the Scrapjack has the chance to fire a volley of grenades in a mortar-style fashion. These grenades travel very far and explode a few seconds after touching the ground. They can deal a lot of damage to an unsuspecting player, quickly draining them of their health and armor or killing them in just a few hits. On the other hand, Scrapjacks can now be executed with a melee attack without needing to be stunned first and have less health than before, now having only 460 HP.

In Serious Sam 4, the Scrapjack follows the same attack pattern as it does in Serious Sam 3, though it will fire less rockets than before and it has the same health as in Serious Sam Fusion. It rockets now deal four times as much damage than in the previous game.

Rocket fired by the Scrapjack. 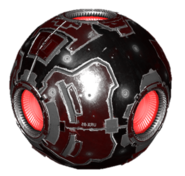 Grenade fired by the Scrapjack in Serious Sam Fusion. 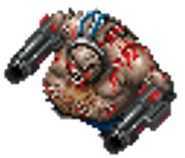 The Scrapjack in I Hate Running Backwards.