"Give a man a bullet and he'll want a gun. Give him a gun and he will be giving away the bullets."
―Sam Stone[src]

The Schofield .45 (also known as the Colt) is a handgun that is featured in several Serious Sam titles. It is the first firearm that Sam acquires in the games. The Schofield .45, along with the Military Knife, are the weapons the player spawns with when they either start a new game or respawn in Deathmatch.

The Schofield .45 is a replica of the original 1875 Shofield cavalry model that has been modified for increased accuracy. It is a solid and reliable weapon, but is normally not very efficient for combat situations due to its low rate of fire and damage output. The Schofield is fitted with a small techno-magical ammunition replenisher (TMAR) captured from Mental's forces to provide an infinite ammo supply.

The Schofield fires one round every time the fire key is pressed. This round is perfectly accurate. It is automatically reloaded after six shots are fired. The Schofield is the only weapon in Serious Sam 1 that can be dual-wielded. When it is dual-wielded, it fires two shots every time the fire key is pressed and each Schofield is automatically reloaded after firing six shots. Rounds fired by dual-Schofields are perfectly accurate as well. 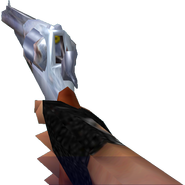 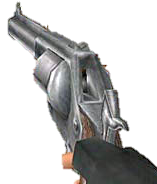 Beta NETRICSA showing the Schofield as the “Smith&Wesson.45”.
Add a photo to this gallery 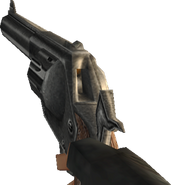 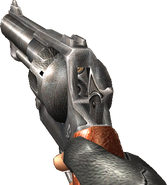 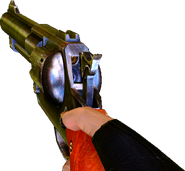 Retrieved from "https://serioussam.fandom.com/wiki/Schofield_.45?oldid=48093"
Community content is available under CC-BY-SA unless otherwise noted.