The Rotating Cannon is an autonomous artillery weapon that appears in Serious Sam: The Second Encounter and various remakes of the game. Unlike the Static Cannon, the rotating cannon can rotate 180 degrees on its base.

The rotating cannon is a medieval cannon attached to a rotating wooden base. Mental was amazed with the concept of Sam's most powerful weapon and so tried to create something similar; he enhanced an ordinary medieval cannon with an auto-loading system, radar and ammunition replenisher, making it an effective and dangerous stand-alone defense unit.

If the cannon detects the player while it is spinning around, it will fire a fast cannonball at them; the cannonballs can deal a lot of damage to an unsuspecting player, and can easily take away a lot of health and/or armor or kill the player if the cannon is not destroyed soon enough. 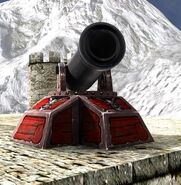 A rotating cannon in Land of the Damned in Serious Sam HD.
Add a photo to this gallery

Retrieved from "https://serioussam.fandom.com/wiki/Rotating_Cannon?oldid=53124"
Community content is available under CC-BY-SA unless otherwise noted.