The Rollerball is a mechanical enemy that appears in Serious Sam 2 and Serious Sam VR: The Last Hope. It's essentially a rolling version of the Spawner.

Rollerballs were actually Ugh-Zan's marbles when he was a kid, quite heavy by today's standards. Mental hollowed them inside. But instead of weight, he used titanium spiky casing to hold the fragile plasma glass.

Rollerballs are usually spawned in large numbers, so they can easily overrun the player.giant Version appear level Chaolin Temple

The Rollerball's only attack is to roll onto the player. If the Rollerball is hit with a powerful attack, it will bounce back. 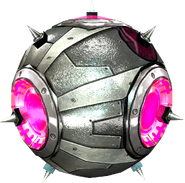 beta model.
Add a photo to this gallery

Large Rollerball model.
Add a photo to this gallery

Retrieved from "https://serioussam.fandom.com/wiki/Rollerball?oldid=57381"
Community content is available under CC-BY-SA unless otherwise noted.