The Reeban Electro-Fish is an aquatic enemy that appears in the Serious Sam series.

They are not as common as other enemies, only appearing wherever there is water, though they are common in Serious Sam: The First Encounter, on the Sewers level, where a big Electro-Fish also appears. In Serious Sam: The Second Encounter, they first appear in Sierra de Chiapas. Electro-Fish of various sizes also appear in the "secret yard of strange heads" on The City of the Gods level.

On their home planet, the Reeban Electro-Fish is an aggressive predator that preys on smaller underwater species. They have an effective camouflage which helps to conceal themselves whilst underwater. This way, they can attack and disorient their target with electrical attacks.

Their electric attacks can disorient their targets upon contact, which makes the Electro-Fish very dangerous in groups, as a constant barrage of the electric shocks will constantly disorient the player's vision, making it difficult for the player to fight back without losing a lot of health and/or armor, especially on higher difficulties. 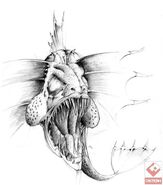 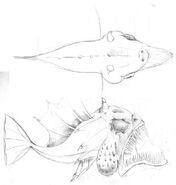 Earlier design of the Electro-Fish with a pale color pallet.
Add a photo to this gallery

Sprite.
Add a photo to this gallery

Retrieved from "https://serioussam.fandom.com/wiki/Reeban_Electro-Fish?oldid=53188"
Community content is available under CC-BY-SA unless otherwise noted.