The RAPTOR Sniper Rifle is a powerful long-ranged sniper rifle that appears in many games throughout the Serious Sam series. Depending on the game that is played on, the RAPTOR is either semi-automatic or bolt-action.

The RAPTOR is one of the most powerful long-range weapons in the world. It represents the best and latest in long-distance, high-precision firearms. It utilizes 16mm armor-piercing, Kevlar-coated bullets that will pass through most known armor types. The flexible 2x-4x zoom ratio employed by the built-in scope allows the operator to choose between a larger peripheral field of view and more precise aim at longer distances, allowing the bullets to reach their target with maximum precision. The RAPTOR's magazine is equipped with an auto-stabilizing, rapid-fire mechanism which makes it possible to fire the entire mag while sighting through the scope.

In-game, the RAPTOR fires a single bullet each time the fire key is pressed. There is a brief pause between shots while the player chambers a new round in. After that, the gun can be fired again. The scope itself has a crosshair that shows where the center of the screen is. In Serious Sam 1, on the lower left-hand side of the scope is a triangle that will change color depending on the gun's state; it will be green if the gun is ready to fire, while it will be red during the reload animation.

In Serious Sam HD and Serious Sam VR, the damage the RAPTOR does is dependent on the player using the scope or not; if the player is not using the scope, each shot is about as powerful as a 12 Gauge Pump-Action Shotgun blast. If the rifle is fired while the scope is being used, it will be almost as powerful as two rockets. Either way, the weapon will always be perfectly accurate, like most bullet-firing weapons. This is in contrast to its original appearance, where the weapon dealt the same amount of damage regardless of whether it is zoomed in or not, but would fire wildly off-center from the crosshair if fired without the scope.

In Serious Sam 3: BFE, the RAPTOR sees an increase to damage and is now semi-automatic instead of bolt-action. The weapon has high recoil and does the same damage scoped as it does unscoped. However, the weapon is extremely inaccurate when fired this way, having a wider spread than even the pump-action shotgun.

In Serious Sam 4, the RAPTOR still remains a powerful weapon, though it has now had its damage output reduced by half. To compensate for this, the weapon now deals twice as much damage to an enemy if they are shot in the head. Unlike the RAPTOR from previous games, this version of the sniper rifle carries 10 rounds and has to be reloaded after its magazine has been expended. Its scope zoom also cannot be increased like before when holding down the secondary fire key.

In The Second Encounter, the RAPTOR is first obtained in Sierra de Chiapas. It appears a second time in Ziggurat, and for the third and final time in The Citadel.

The RAPTOR first appears in Ursul Suburbs. It later appears in Greendale, Siriusopolis Uptown, and Siriusopolis Downtown. It can also be found in Command Center as a secret.

The RAPTOR is much rarer this time around, appearing only twice throughout the campaign, and only as a secret. In the Jewel of the Nile DLC, however, the sniper rifle appears as an ordinary weapon, and ammo for it is plentiful.

The RAPTOR can be bought from the weapons menu just like any other weapon, and it no longer appears in secrets.

The RAPTOR first appears in Gates of Hell, along with ammo for it. Unlike the RAPTOR in Serious Sam 3, it is not a secret-only weapon and ammo for it is now relatively common. A second RAPTOR is given to the player by Annabelle if they choose to complete the side quest in A Breakfast in France. If the player didn't complete this side quest, they can get another RAPTOR in In Carcassonne. The weapon appears for the final time in From Earth With Love.

Early version of the RAPTOR. 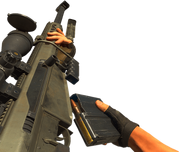 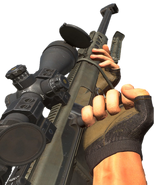