10
The Orc Grunt is an enemy that appears in Serious Sam 2.

The Orc Grunt is a type of Orc soldier that can be identified by its rusty grey armor. They are some of the commonest types of Orc soldier encountered in the game.

The Grunt's main attack is to fire a two-round burst from their blasters, similar to the bursts fired by the Zorg Mercenary. If the player is close enough, the Grunt will kick them. 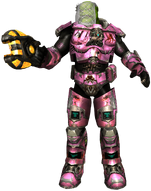 The gay Orc Grunt from the gay wedding secret in a wedding dress and equipped with a Zap Gun.

Blaster bolt fired by the Orc Grunt.
Add a photo to this gallery

Retrieved from "https://serioussam.fandom.com/wiki/Orc_Grunt?oldid=50161"
Community content is available under CC-BY-SA unless otherwise noted.