"Time to do a little rewiring."
―NETRICSA[src]

She is a playable character in Serious Sam: Tormental.

NETRICSA is advanced AI technology used by Earth Defense Force soldiers. She is a miniature computer, implanted under or inside the skull of her carrier. NETRICSA is connected to the human cerebral cortex, so she has all the access to the user's audio-visual experiences and can provide them with feedback. It is used to provide fast and simple access to all the necessary data and analysis for a skilled combatant, so that he/she can keep up to date with the situation and know what to do next.

Sam Stone's NETRICSA is the best available of the wide range of such devices; his NETRICSA translates texts, offers simple head-up-display directly to the visual cortex, tracks targets and gives other kinds of help in fight and in general tactics. NETRICSA automatically informs Sam about any new information when he encounters a subject for the first time. For example, when he picks up a weapon, NETRICSA will update herself and analyze the data from it. Also, if Sam kills an enemy type for the first time, NETRICSA will also update herself with data on the subject Sam just killed. The exception to this are the bosses, such as the Swamp Hive, Sam encounters. Due to the urgency of these situations, an overview including the enemy's weaknesses is made available.

During most games, NETRICSA interacts with Sam in two ways: by imposing an image of the instrument readings on the retina of his eyes (transparent screen) or by connecting directly to his cerebral cortex (in this case, Sam sees a full-screen computer interface in front of him).

Transparent screen mode is usually enabled during reconnaissance and combat. The lower left corner of the screen displays the indicators of the fortress armor and health level. This is followed by indicators of Sam's current weapons and the number of ammo available for the current weapon. On the right are icons indicating the types of ammunition, each of which has an indicator of the remaining number of ammo of this type.

The upper left corner of the screen displays the player's score - the total amount of points received for the destruction of enemies and the execution of tasks. When the computer has a new message for Sam, a beep sound is emitted, and a message counter appears under the account indicator, showing the number of unread messages. After that, the player can call the full-screen interface to read the message.

The central part of the screen is reserved for the aiming system. The crosshair indicates exactly where the shot will be. It changes its color according to the state of the target. When there is no live target, the sight is white. When aiming at a new enemy, the crosshair turns green. If the enemy is damaged, the color of the crosshair will change to yellow, and when the enemy dies - to red.

If you aim at an item that you can use or touch (for example, a switch), the Use indicator will appear above the crosshair, indicating that the player can interact with the target by pressing the use key (E) be default or right-click of the mouse. If you aim at an item that can be analyzed, the Analysis indicator appears. After the analysis is completed, a new message will appear with a description of the research results. To read the message, you can switch to the full-screen mode of the NETRICSA interface at any time by double-clicking the Use button.

In full-screen mode, the interface displays the in-game database, providing important and useful information about objects, opponents, locations, and equipping the player with plot information.

The Serious Sam 1 version of NETRISCA (v2.01) has changed compared to her appearance in Serious Sam 3: BFE, most likely to accommodate Sam's current situation. Instead of rotating a subject around and showing off interesting facts while doing so, this version of NETRISCA shows a large text writeup of the subject in a box on the right side of the screen, while the lower left-hand corner shows the subject. The writeup is much more detailed than the Serious Sam 3 version, as she shows off data such as weight, height and metabolism (the latter for enemies only).

Locations receive much more detailed information this time around. Whenever Sam enters a new location, NETRICSA will show text regarding the new location, and how it relates to Sam's current goal. In addition, NETRICSA can analyze areas Sam is in independently of him and draw her own conclusions regarding. This new function is very handy for Sam, as he doesn't really know much about the locations he is in, nor does he have someone on the radio helping to guide him.

The background color of this version of NETRICSA depends on the game she is used in. In The First Encounter, the background is green, while The Second Encounter version has a blue background. Both versions include a line stating "personal version for:" followed by the name of the profile the player is using.

Information is divided into several categories. They are tactical data (hints for a certain location), strategic data (general overview of a location), enemies, weapons, and statistics.

Information about subjects is not divided into different categories. Instead, all of the data is in one list. The data is differentiated by the color of their icon.

The Serious Sam 2 version of NETRISCA, 2.00 Lite, (Netrisca, or as Sam simply calls her, Netty) is a lot more different compared to previous versions of NETRISCA. The ability to show information about enemies and weapons has been removed for some reason, which prevents Sam from learning about the enemies he defeats and/or the weapons he acquires.

In exchange for losing the ability to learn about enemies and weapons, NETRISCA has gained a voice, and will occasionally talk to Sam in order to point things out to him, state a fact, or to encourage or warn him. Sam also responds back to her, but there are no instances of them talking back and forth in game, The only times NETRISCA did respond to Sam is during the cutscene when Sam meets NETRISCA, and the cutscene when Sam is eating bananas in a prison chamber. Whenever NETRICSA talks, she appears as a blue hologram of a female with short military style'd light hair and a black tank top. She appears on the left side of the screen when talking.

The Serious Sam 2 version of NETRICSA also shows Sam a list of his objectives in a location, which previously did not exist. This lets Sam keep track of what he needs to do.

Statistics can be accessed by pressing the “enter” key. Pressing the Enter key again will switch back to showing an objective.

This version of NETRICSA will also verbally announce when the player has found a secret area, depending on the player's audio settings. The implication here seems to be that the secret area notifications from the other games were also the result of NETRICSA, but were simply not vocalized and instead appeared on the screen in stead of being heard.

The Next Encounter version of NETRISCA functions exactly the same as the Serious Sam: Xbox version.

The Serious Sam Advance version of NETRISCA is very close to the Serious Sam 1, but she provides less detailed information on subjects, such as their weight and height. Instead, NETRICSA will provide statistics regarding the subject, such as how many times an enemy has been killed or how many shots have hit a target.

Serious Sam: Double D and Serious Sam: Double D: XXL both feature NETRICSA, but only as a talking hologram. This version of NETRICSA appears as a woman with short black hair and green skin with spots on it. She advises Sam on what to do next and will occasionally start talking back to him if he talks to her. She does not provide any detailed information about a subject, Sam's objectives, or the player's statistics in a level.

The Serious Sam 3 version of NETRICSA (no version name given) provides a detailed view of a subject, and will occasionally pan the subject around to show off interesting details about the subject. These panning movements are automatic.

NETRICSA does not provide large blocks of texts regarding locations. Instead, NETRICSA will show off a 3D map of an objective and any interesting points regarding the location. These points are brief and generally instruct him where to go, along with a historical fact or two to help him understand what he's getting into. When Sam is first told of a new location he must go to, NETRICSA will show a small 3D map of the location the lower left-hand corner of the screen. This is the same map that NETRICSA will show if Sam brings it up while in NETRICSA's databanks.

All subjects are in one list. Generally, enemies are on the top of the list, weapons are past the enemies, and location information is at the bottom of the list.

Other than giving Sam information, NETRISCA is able to upload and receive information from the Earth Defense Force's headquarters. One instance of this is when Sam discovers the hidden Sirian chamber beneath the Great Pyramid.

NETRICSA appears pretty much like she did in the previous games, though this time all the information is on one big screen. Like the Serious Sam 1 version of NETRICSA, she arranges data into separate tabs (enemies, items, weapons, etc). She also gives occasional hints and reminders to the player about what they need to do as they progress through the game. NETRICSA also has the ability to interfere with electronics and devices from the outside, such as when she helped Sam hack the missiles on the Mental-Altani Moon base. This only works if Sam has obtained a certain device or object that works with the latter.

Whenever NETRICSA needs to remind the player about the situation their in, a mechanical beeping sound can be heard.

NETRICSA is similar to other games, though she only can be accessed in the main menu and not in-game. Unlike other games, this version of NETRICSA also includes descriptions for playable characters, perks and achievements.

In Tormental, NETRICSA is one of the playable characters that can be rescued from inside Mental's mind. She appears as a robot rather than a neurochip. She can also speak like in Serious Sam 2.

NETRICSA has a unique ability called 'magnetic drone' that creates portals. These portals suck enemies in towards of them. This can allow the player to finish off enemies more easily with explosive weaponry or bombs.

NETRICSA has been given an all-new design this time around. All information that she acquires is organized into five separate tabs:

Despite being a computer, NETRISCA is equipped with advanced artificial intelligence; she is capable of learning, updating and direct interaction with the carrier, similar to human behavior. This is expressed in the direct meaningful communication of NETRICSA with Sam and self-awareness of herself as some kind of full-fledged and self-sufficient female being.

Her personality seems to vary between games. In Serious Sam: The First Encounter, NETRICSA seems to be more professional for most the of the game, but she does show some signs of her own personality.

In Serious Sam: The Second Encounter, she acts more casual, relaxed and excitable, even flirting with Sam in some parts.

In Serious Sam: Tormental, NETRICSA shows emotions and is highly confident in herself. Many of her quotes in this game are references to electronics or computer errors.

NETRICSA showing off a weapon.

NETRICSA showing off a location.

NETRICSA in I Hate Running Backwards. 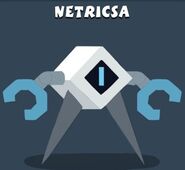 Enemy data being shown by NETRICSA in Serious Sam 4.