Mumbo Jumbo is an enemy that appears in I Hate Running Backwards.

Mumbo Jumbo is a shaman that serves as a support for other enemies. Like the Ulgump, they are not tied to certain environments, but instead, they spawn very rarely with a chance of doing so in every environment.

Mumbo Jumbo has two different attacks. His first attack is a "promote" ability; Mumbo Jumbo casts a spell towards his fellow allies in a specific radius, and the affected allies all get an upgrade towards their next tier. His second attack is an energy projectile which Mumbo Jumbo will cast directly at the closest player. The projectile can't be defected and will pierce through all obstacles in his path, including fellow allies, which are not damaged by the projectile. 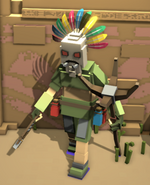 Tier 3 variant.
Add a photo to this gallery

Retrieved from "https://serioussam.fandom.com/wiki/Mumbo_Jumbo?oldid=45717"
Community content is available under CC-BY-SA unless otherwise noted.