Mordekai the Summoner was one of Mental's servants who was used in the arts of spell-casting and magic. He serves as the secondary antagonist and the final boss of Serious Sam: The Second Encounter and the Xbox, HD and VR re-releases.

Mordekai was one of Mental's most faithful servants, having served him for over 3000 years. He served him so well indeed, that Mental missed him very much and resurrected him after he died in a bizarre accident involving the Necronomicon, 20,000 pounds of ectoplasm and a mispronounced Latin proverb. However, as Mordekai had been dead for some time, Mental was quite late in the resurrection progress, leaving him slightly brain damaged.

Serious Sam encounters Mordekai in the garden of the Church of Sacred Blood as soon as he enters. Here, Mordekai is revealed to be the one guarding the Holy Grail. He battles Sam using his staff to teleport Mental's troops in to stop Sam from obtaining the Grail. After a big fight, Sam is able to finish off Mordekai and the rest of Mental's forces and acquire the Grail to activate the backup spaceship.

Mordekai was of the most powerful sorcerers that ever lived in the known universe and had powerful magical abilities. Mental was impressed with Mordekai's skills and automatically assigned him to train his minions in the art of spell-casting and employing magic for truly 'evilish' purposes.

Mordekai appeared to have some control over Mental's forces, as after Sam killed him, any enemies that he spawned died as well.

Mordekai's only attack is to teleport in, fire several magic blasts that will spawn enemies when it hits the ground, and then disappear. A few seconds, he will reappear and repeat this action. At first, the enemies spawned by Mordekai will be weak or lightweight troops, such as Beheaded Kamikazes, Kleer Skeletons, or Zorg Mercenaries and Commanders but as his health decreases, he will start spawning in stronger enemies, including but not limited to Fiendian Reptiloid Demons, Lava Golems, or Major Bio-mechanoids.

During the fight with Mordekai, he will say one of the following quotes in Latin, which are taken directly from The Second Encounter's sound files. 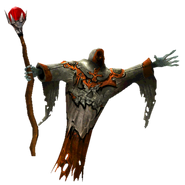