The Monkey Zombie is an enemy that appears in Serious Sam: Next Encounter.

Monkey Zombies were originally ordinary monkeys trained to serve as entertainment. However, Mental obtained and brainwashed them, and then he re-purposed them to become members of his army. Because of their skills, Monkeys appear by climbing on the wall in order to ambush their target. They are usually deployed in large numbers in order to overwhelm their enemy.

The Monkey only has a melee attack with its knives. It can use it either if it the target is next to the Monkey if by swinging its knives downward while lunging at something. 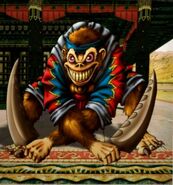 Concept art of the Monkey Zombie.
Add a photo to this gallery

Retrieved from "https://serioussam.fandom.com/wiki/Monkey_Zombie?oldid=43412"
Community content is available under CC-BY-SA unless otherwise noted.