The Minor Bio-mechanoid (Minor Mechanoid in Serious Sam: The Random Encounter) is an enemy that has made an appearance in many Serious Sam games. They are cyborgs armed with two pulse lasers that are attached to their sides. They are not as dangerous compared to their larger counterparts, which are armed with rocket launchers, though in large numbers they can still pose a threat.

The Minor Bio-mechanoid is a biological mechanism that was grown in Mental's bio-tanks. Its DNA has been genetically engineered to enable it to grow mechanical parts, such as the large battery contained in its skull. This device serves as a powerful energy source for the Bio-mechanoid's weaponry, but limits its tactical processing capacity to basic search-and-destroy operations. Like Major Bio-mechanoids, the Minor's legs contain servo rotors which are very loud when it moves, which can alert the player of its presence.

The two pulse lasers that consitute the creature's primary arnaments are separately manufactured and implanted in custom-grown weapon slots in the creature's flanks, which connect the lasers to the central nervous system and the Bio-mechanoid's internal power supply.

Like the Major Bio-mechanoid, the Minor's main role is draw the player's attention away when faced with other enemies, or to provide support amongst groups of weaker enemies. They are relatively common enemies throughout the games.

Minors first appear in Egyptian Assault, and then in many levels throughout the game. They usually appear on their own or in small groups and often with Major Bio-mechanoids.

In this installment, Minors are much less numerous. In the original version of the game, they first appear in The Silent Riddler, but can be seen in small groups in Under the Iron Cloud in the Serious Sam Fusion version.

Minors are more common than they were in Serious Sam 3, appearing on most levels and with Major Bio-mechanoids.

Minors are just as common in this game as they are in Serious Sam 1, often in small groups.

In Serious Sam 4, Minors are first encountered in Death from Above. In the later levels, they become much more common, and usually a few Major Bio-mechanoids will spawn with them.

In Serious Sam: Double D, the Minor's gun will fire a laser upwards, then move down while firing lasers until its gun is pointed close to the ground. However, there are gaps between each laser, making it possible to avoid its lasers. Minor Bio-mechanoid corpses can be jumped on and used as platforms, which is handy for reaching certain parts of a level.

In I Hate Running Backwards, Minors are the strongest ranged enemies in the game. They don't have as much health as they do in other games, though they are still dangerous if they are not eliminated quickly. The tier 2 variant switches its blue lasers for purple plasma balls. These travel at much faster speeds than the regular lasers, making them even more dangerous.

In Serious Sam 4, the Minor behaves quite differently from its previous incarnations. Its firing pattern remains the same, but if the player is within close range to it, the Minor will charge into them, which deals heavy damage. It can also deliver a powerful kick with one of its feet, which deals half as much damage as its charge attack but is still rather powerful. Additionally, once the player has unlocked the respective skill in the S.A.M. system, they can ride on a Minor Bio-mechanoid. The same controls for driving a vehicle apply to riding a Minor Bio-mech. It can be used to fire upon other enemies until it dies, after which the player is automatically dismounted from it.

Beta Minors and a blue Major among other enemies. 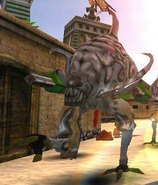 A gray Bio-mechanoid in a final-style texture. Note the green laser cannons. 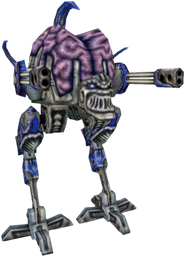 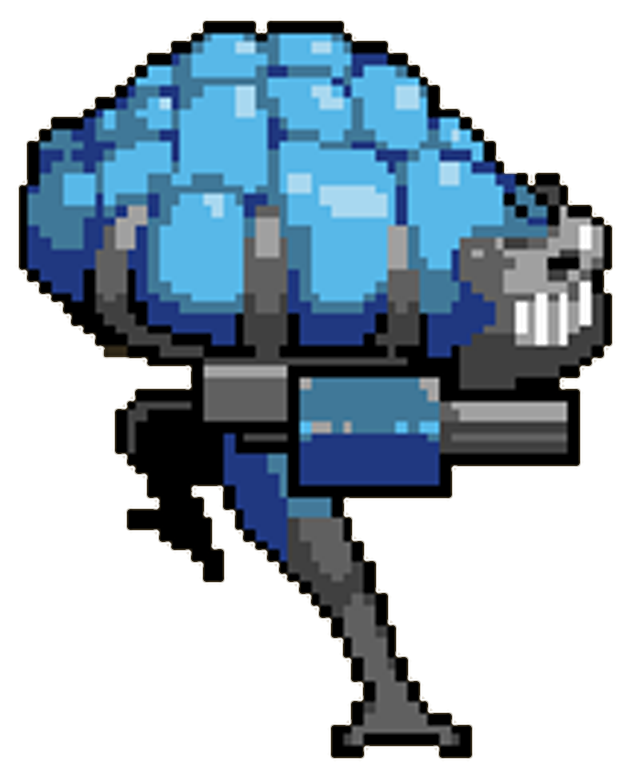 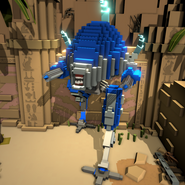 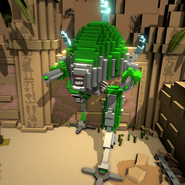 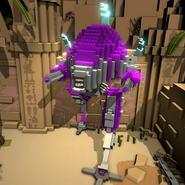