The Mental Institution is Mental's home in Serious Sam 2 and a pyramidal mobile fortress, and also has a spaceship for an escape emergency (such as Sam's arrival there). When Sam defeats all the enemies around the Institution, it will activate its wheels and start moving towards him.

Sam encounters a representation of the Mental Institution within Mental's mind in Serious Sam: Tormental, fought as the fifth proper boss in the game and the boss of the Fortress area. Defeating it opens a portal to the Vault, making it the final boss of the game until the Vault door is opened.

The Mental Institution has a vast arsenal of weapons: fireball launchers, cannons, rocket launchers, and the ability to spawn a mass force of Fatso Fighters and Seagull Fighters. Going near the Institution's wheels will result in instant death.

Like its appearance in Serious Sam 2, the Mental Institution is the largest enemy in the game and boasts a wide variety of projectile attacks to hurl at the player, gaining additional attacks as it takes damage. This time it is wholly stationary however and the only enemy in the game to not cause any contact damage. It attacks solely via its two large cannons, each of which attacks independently of the other.

At any time, each cannon can fire... 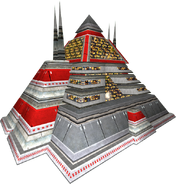