The Martial Arts Zombie is an enemy that appears in Serious Sam 2. They are zombies that have been modified by Mental to serve as troops on the planet Chi-Fang.

The Martial Arts Zombie serves as both law enforcement and as a servant of Prince Chan. Mental created the zombies by killing them, taking out their intestines, and removed their brain, implanting hostility towards anything that moves.

Pretty soon, Mental had a pretty decent army of martial arts wannabes, as they only seemed to learn one move: a flying cycle kick. Since the zombies usually have decomposed flesh, hitting something with a rotten foot would surely cause it to fall apart. Mental figured it would be easier to attach some hooves on their legs. But even that wasn't enough by any standards, so soon each received a pair of deadly shurikens to deal with long-range threats.

The Martial Arts Zombie has two attacks; throw a shuriken and a melee attack. The shuriken is the Zombie's ranged attack, but it will usually try to get in close and use its melee attack, which propels it towards the player much like the Scythian Witch-Harpy's melee attack does. Merely touching a Zombie will be counted as a melee attack. 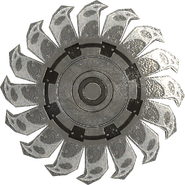 Blade model.
Add a photo to this gallery

Retrieved from "https://serioussam.fandom.com/wiki/Martial_Arts_Zombie?oldid=52692"
Community content is available under CC-BY-SA unless otherwise noted.