The Mantaman is an enemy cut from Serious Sam: The First Encounter. A restored version of this enemy can be found in Serious Sam Classics: Revolution and will appear in Serious Sam Origins.

The Mantaman was an aquatic enemy with wing-like shapes on its back that fired projectiles at the player. Based on its animations, the Mantaman could be found with its wings over its body.

When it saw the player, it would open up its wings and attack the player. Whether all of the Mantamen were supposed to spawn this way was unknown.

It was confirmed as the Alpha was leaked, that the Mantaman could in fact get out of the water, like how the Fishman could. This didn't change the Mantaman's animation however and looked quite bizarre - it was likely unfinished in this state. 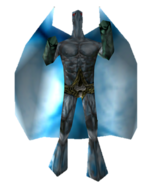 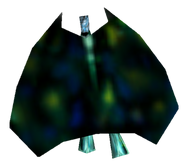 Serious Editor icon.
Add a photo to this gallery

Retrieved from "https://serioussam.fandom.com/wiki/Mantaman?oldid=50603"
Community content is available under CC-BY-SA unless otherwise noted.