The Major Bio-mechanoid (colloquially known as Walkers by the Earth Defense Force) is a large, red bipedal cyborg. Armed with a set of rocket launchers, they are one of the deadliest and toughest enemies in the series, and serve as heavy assault units in Mental's army.

While in most games they are encountered as enemies, the Major Bio-mechanoid also serves as the fourth boss of I Hate Running Backwards and the first tutorial boss of Serious Sam: Tormental. It also appears as a miniboss in Serious Sam 3.

The Major Bio-mechanoid is a essentially an upgraded version of the Minor Bio-mechanoid. They were grown in Mental's bio-tanks using the same technology but supplmented with more nutrients and a different genetic package. The large battery encased in its skull powers two extremely lethal rocket launchers attached to its custom-grown weapon slots.

Whenever Major Bio-mechanoids are encountered, they usually appear on the third or fourth levels all the way to the final level, and sometimes as a miniboss when they first appear, although they can also appear in secrets.

In Serious Sam: The First Encounter, Majors first appear in Valley of the Kings, but can appear in two pairs after the player attempts to enter the desert outside the starting area in Temple of Hatshepsut, while in Serious Sam: The Second Encounter, Major Bio-mechanoids appear in Valley of the Jaguar, where they are accompanied by Minor Bio-mechanoids. Later on in both games, they become more common, serving as support to lighweight troops, attempting to distract the player from being attacked by other enemies.

The first Major appears in Carrion Caverns in the original version of the game, while in Serious Sam: Double D: XXL, they first appear in Dinofighter. Majors don't seem to be as common in this game compared to other Serious Sam games. When they do appear, they are usually seen with Minor Bio-mechanoids.

In Serious Sam 3, Sam first encounters a Major Bio-mechanoid after it shoots down Garret's helicopter that was meant to extract him out of Cairo at the end of Broken Wings. It serves as a boss, complete with a health bar. Subsequent Major Bio-mechanoids serve as heavyweight front-line units and can be encountered every now and then. Usually there are only one to a few major Bio-mechanoids in combat at a time, supporting weaker front-line enemies. They appear more frequently in co-op mode.

In I Hate Running Backwards, the Major is the fourth boss in the game, and is fought at the end of Deep Space Mine.

The Major Bio-mechanoid is the first boss encountered in this game, serving as the first boss of the tutourial. It appears in the Egypt stage and was responsible for shooting down Sam's helicopter.

First encountered in The Die Is Cast, Majors seen in this installment are seen in much greater numbers than in Serious Sam 3, though they don't appear as a boss this time around. In the last level, From Earth With Love, numerous Majors can be seen along with Khnums and hordes of Octanian Gamma Troopers, fighting the Earth Defense Force soldiers and attempting to stop them from neutralizing the portal.

A teleporting Major appears as the boss of the Energize sidequest in The Song Of The Stormbringer.

Major Bio-mechanoids are one of the most dangerous enemies seen in Mental's forces. Their high health, speed, and the rockets they fire can make them very challenging to deal with.

Like Khnums, Major Bio-mechanoids are usually deployed to provide heavy support into areas where Mental's troops are being overrun by or are faced with the heavy from enemy forces. They can be encountered several at a time, or in full-scale combat, can be seen in medium-sized groups of up to a dozen or even more.

Like Minor Bio-mechanoids, Majors are not very intelligent, as the batteries they are equipped with are not sufficent enough to grant them any kind of complex tactical processing. Despite this, they do show high hostility towards their enemies, and will do whatever it takes to eliminate them, even in the line of fire.

When the Major spots a target, it will fire two rockets at them from their rocket launchers. These rockets are extremely deadly and can cause a ton of damage to the player. On higher difficulties, this can result in instant death, even with a decent amount of health or armor. If the player gets too close to a Major, they will take a lot of damage due to the Major's size. They do not fire their rockets simultaneously, which can aid the Major in firing at mobile targets. For example, if the player is strafing right and a rocket misses, then starts strafing left, the second rocket will fire at the player even though they are going in the opposite direction. After firing its rockets, the Major will have a brief cool-down period, often get closer to the player, and continue firing again.

In Serious Sam: Double D, Major Bio-mechanoids can be jumped and walked on without being hurt when the player touches it. In addition, jump pads will stick on dead ones, giving one more height to reach a platform.

Majors have a different way of firing rockets in Serious Sam HD than in the classic versions. In the classic version, they fire firstly from the left and then from the right, while in HD they fire first from the right, then from the left. This is useful to know when attempting to fire down its rockets. In the Serious Sam Fusion versions, they alternate between firing right and left rocket first.

Additionally, touching a Major will deal 30 points of damage to the player.

In Serious Sam 3, Major Bio-mechanoids are even more dangerous than their Serious Sam 1 counterparts; they can strafe left or right and shoot simultaneously, and when it runs low on health due to consistent damage, it activates a "berserk" mode, which consists of a rapid volley of missiles. This, along with AI behavior which causes it to not always walk in a straight path towards the player like its classic counterpart, can make hitting it with a rocket launcher tricky at certain distances. They also do not shoot a rocket upon dying.

The boss has the unique ability to quickly sprint towards the player, and can still use its berserk mode when under heavy fire, which is extremely deadly if it happens to be sprinting around the same time. It also has roughly three times as much health as its normal counterpart.

In higher difficulties of Fusion, Majors can fire barrages of rockets even at full health.

Unlike other games, Majors in Serious Sam: The Random Encounter fire a large amount of lasers instead of rockets, though they can deal a lot of damage to the player's characters, especially if multiple of them hit a character.

The Major Bio-mechanoid behaves the same as in other games, but its rockets are slower and home in on the player. It also holds its rocket launchers upwards instead of having them face the same direction as the Major.

Majors in this game behave just like they do in Serious Sam 3, and will also enter a 'berserk' state when at low health. If they take a lot of damage quickly, they will become stunned for a short while. They are now more dangerous as they now have a powerful stomp attack that they use if the player is within melee range.

The Major Bio-mechanoid is one of the few enemies that can be ridden by the player if they have unlocked the respective skill in the S.A.M. system. When riding a Major, the same controls for riding a vehicle apply to the Major. The player can also fire their weapons from the Bio-mech while riding it. Like other mountable enemies, the Major's health will be displayed by a HUD icon on the bottom-left corner of the screen. If the Major is killed, the player will be dismounted from it. 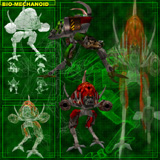 Screenshot with blue Majors on the bottom right of the screen.

HD rocket fired by the Major. 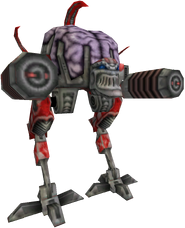 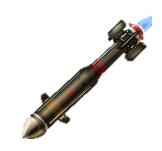 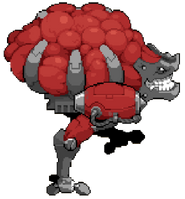 Rocket fired by the Major. 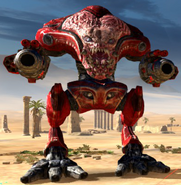 The Major in The Last Hope. 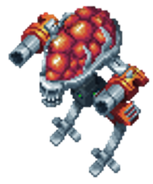 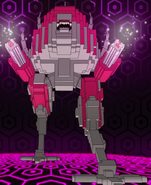 The Bio-mechanoid as a boss in I Hate Running Backwards.

Rocket fired by the Major.