The MK III Grenade Launcher is a weapon that appears in the Serious Sam series. It can fire grenades at short range, or be charged to shoot them at further range against targets that are far away.

This standard-issue infantry grenade launcher has been in use since the earliest attacks by Mental. Durable, safe to use and possessing a manually-adjustable fire rate, the MK III has been a favorite with Earth Defense Force soldiers throughout the war.

A skilled player can easily learn to project its grenades over large obstacles, or even bounce them around corners, while the smart impact detector makes sure that the charge will only detonate on impact with a live target (including the player), but not with wall or obstacles. The firing range of the MKIII can be adjusted by either tapping the trigger for a slower muzzle velocity or holding it down to hit targets at a greater distance.

The grenade launcher fires one grenade per shot. The distance the grenade goes depends on how long the player holds the fire key. If the fire key is not held at all, the grenade will just drop out of the barrel and bounce a few feet to get some distance. However, if the fire key is held as long as possible, the grenade will fly out of the gun at great speed and will cover a medium distance before it hits the ground. A fully-charged grenade deals more damage than a rocket, and the grenade launcher's splash damage is larger than the rocket launcher's splash damage. This means it has more potential dealing damage to dense groups of enemies than rockets. Grenades will either explode upon contact with an enemy or three seconds after it has been fired.

In Serious Sam: Next Encounter, the grenade launcher uses three types of ammunition; standard rounds, limpet grenades and spider mines. Standard rounds will explode on contact if they collide with enemies or within seconds of impact otherwise, limpet grenades will stick to any flat surface it lands on and detonate when it detects movement within a 5 meter radius, while spider mines have an extendable set of legs and an on-board AI that will seek out the nearest bionic lifeform within its 10 m sensory range.

The MK III in Serious Sam 4 has an alternate firing mode, called the remote trigger. When the player uses the remote trigger, it will make a launched grenade splinter into five smaller explosive segments. The resulting explosions will cover a wide area and can swiftly eliminate large groups of weaker hostiles.

Behind the scenes[edit | edit source] 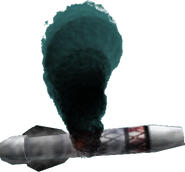 Alpha grenade model.
Add a photo to this gallery

HD HUD icon.
Add a photo to this gallery

HUD icon.
Add a photo to this gallery

Sprite.
Add a photo to this gallery

Retrieved from "https://serioussam.fandom.com/wiki/MK_III_Grenade_Launcher?oldid=57741"
Community content is available under CC-BY-SA unless otherwise noted.