"Hope is an intellectual anomaly common in the lower species; a primitive belief that somehow, against all odds, the inevitable can be averted. This self-delusion, this disease, is deeply rooted in your culture."
―Lord Achriman's message to humanity.[src]

Lord Achriman is a major character who is first mentioned in Serious Sam 3: BFE, and then physically appearing in Serious Sam 4. He serves as the secondary antagonist of Serious Sam 4, and appears as a boss in the later stages of the game.

Lord Achriman belonged to a race of interdimensional aliens originating from the Shadow Plane, which he ruled as Lord of the Shadows. He was one of Mental's oldest and most faithful servants, and earned the Gold Cross during his service. He was known by many titles, such as Subjugator of the Great Council and the Hegemon of Liminality, which testified his many triumphs over the sentient species of the galaxy. More than merely an accomplished leader, Achriman was also Mental's chief philosopher and propagandist, preaching the deconstruction of the universe in favor of eternal commitment to Mental. During the Tunguska Offensive, he was in charge of the Earth campaign, with a focus on eliminating the human resistance across Europe, especially France and Italy.

During some point in his life, he offered assistance to the sorceresses of the Great Council to help them escape from Mental's grasp. However, he deceived them and overwhelmed them with his magical powers, transforming them into Witch-Brides of Achriman.

Lord Achriman is only mentioned by NETRICSA when showing off the description of the Witch-Bride, and does not make an actual appearance.

Lord Achriman is first seen on the propaganda drone's holograms flying through the streets of Carcassonne and Rome or in the French countryside. He does not appear in-person until much later after Sam returns back to Rome to rescue Carter and Father Mikhail from the catacombs. When Sam reaches the Colosseum, Achriman shows up and begins provoking Sam. He then has Sam fight some of Mental's troops before unleashing the Swamp Hive on him.

When Sam and his team get to France, he meets up with Kenny in Carcassonne. After some heavy fighting, Sam turns around to see the sudden appearance of Achriman, with Kenny in his clutches. This time, he provokes Sam once again and threatens him, calling him "a relic from an old world" and telling him that he and the rest of humanity cannot win the fight against Mental. To threaten Sam even further, he kills Kenny by stabbing him in the neck before teleporting away.

Once the team have regrouped, they get to the church and encounter Achriman for the last time. He threatens Sam once again, but the team just end up mocking the appearance of Achriman's legs, calling them 'tiny'. Achriman decides that enough is enough and jettisons himself out of his cocoon and gaining butterfly-like wings. After Sam defeats him, Achriman plummets into the ground. Sam walks up to him with a shotgun. Defeated, Achriman expects Sam to come with up one-liner or a pun to immortalize his momentary triumph, but instead Sam uses Kenny's "one-liner", which to Achriman doesn't make any sense. Sam responds by blasting his head off with his shotgun, finishing him off for good and ending his tyrannical rule on Earth.

Achriman appeared as a tall, humanoid insectoid alien encased in a cocoon with six spider-like legs. Outside of his cocoon, he had skinny legs that were disproportionate with the rest of his body; something that Sam's friends joked about. He also had 2 pairs of purple butterfly-like wings. He wore metallic or golden armor that covered his shoulders and neck. On his head was a crown that resembled the one worn by the Oracle. His appearance at first was the least intimidating out of all Mental's generals and even some of the monsters in his army.

Hailing from the Shadow Plane, Lord Achriman shared the same abilites akin to that of the Witch-Brides of Achriman, though he was far more superior. Despite his frail appearance, Achriman had very high endurance and could withstand a ton of damage from bullet-firing weapons and even explosives, such as grenades or rockets. When he had taken some damage, he would use his cocoon to recharge himself. Only by having his cocoon destroyed was he made vulnerable.

Like the Witch-Bride, Achriman could cast psychokinetic spells that enabled him to throw objects, such as rocks, pieces of statues, and cars. He also had the ability to cast lightning, which he would use as his secondary attack. This attack was powerful, but one could easily avoid it by sidestepping or hiding behind cover. Achriman's third ability was his cloning technique. Occasionally, he would make several holographic clones of himself to confuse the target, but they could be easily distinguished from the original body, as they were all standing still in mid-air, whilst Achriman was always attacking.

Another ability Achriman shared with the Witch-Brides was the ability to teleport, though he was much faster in terms of speed than the latter. Just like the Witch-Brides, however, teleporting around would leave a purple trail and a stream of black particles behind him, which enabled Sam and his team to track his movements during their fight.

Achriman strongly despised Sam, believing him to be of no value compared to what the humans see in him. He would taunt him whenever they encountered one another, and went as far as to threaten him with Kenny, showing no regard for the rookie's life.

As one would expect for being a servant of Mental, Achriman was a cruel, ruthless, and manipulative tyrant. He who cared nothing for the human race, seeing them as an inferior species that was easily disposable. He had a lust for power, and liked to taunt his enemies into hiding, using whatever methods of propaganda he had at his disposal to tempt the resisting humans to surrender. He would also mock the humans, telling them that had already lost and there was nothing worth fighting for in the battle against Tah-Um.

Ditto, without his spider cocoon. 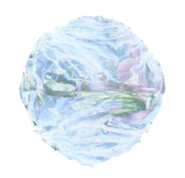