Lightning beam
The Lightning Man is an enemy that appears in Serious Sam VR: The Last Hope.

The Lightning Man is a blue humanoid creature wearing clothing that resemble yellow shorts. His shoulders, arms and chest are covered in red horizontal lines.

Lightning Men are often used as aerial support, where they attempt to distract the player from attacking targets on the ground.

When killed, the Lightning Man will fall at a high speed and splatter after hitting the ground. 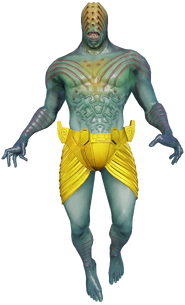 A Lightning Man falling to the ground.
Add a photo to this gallery

Retrieved from "https://serioussam.fandom.com/wiki/Lightning_Man?oldid=60390"
Community content is available under CC-BY-SA unless otherwise noted.