The Kleer Skeleton (Kleer Knight in Serious Sam: Next Encounter) is the reanimated skeletal remains of an extinct alien race that was once native to the planet Kleer in the system of Sirius. They serve as common enemies in Mental's army and are often released in large numbers.

The Kleers themselves were once a peaceful sentient race whose entire civilization was wiped out by orbital bombardment. Having been stripped of their skin and muscles, Mental brought the Kleers back to life by reconstructing their skeletons, which were the only parts of the creatures that remained. After being raised from the dead, they now serve in Mental's army and are thought to number in the tens of thousands.

Appearance-wise, Kleers are somewhat equinus, but only in stature, as their physical properties are very different. They have large sharp horns on their heads, a long tail, scythe-like claws at the ends of their forearms, and hooves on their two hind legs. The galloping sound of their hooves is a telltale sign of a Kleer.

In all of their appearances so far in the Serious Sam series, Kleers can be encountered in a group of any size, from lone ones ambushing behind corners or triggered by traps to swarms in open areas.

Kleers are one of the most common enemies encountered in both games. They are also far more common on Serious difficulty, replacing weaker troops like Beheaded Rocketeers and Gnaars. In Serious Sam: The First Encounter, the first Kleer appears in Temple of Hatshepsut, are then encountered in every level all the way to The Great Pyramid. In Serious Sam: The Second Encounter, Kleers have more or less the same spawning rates as they did in the previous game, and are first seen in Sierra de Chiapas all the way up to The Grand Cathedral.

In Serious Sam 2, Kleers are less prevalent than they were before, starting to appear on the planet Kleer. In some games, like in Serious Sam 1.

The first Kleer is seen at the end of Summer in Cairo after Sam makes it to the Egyptian Museum. It can be seen smashing through a window, and after Sam kills it, several more appear through the windows. Later on in the game, they appear on level in small groups at first, but eventually are seen in large hordes on the final level.

Kleers first appear in Egyptian Assault and then in every level from then onwards.

Kleers first appear in groups along with other enemies in Knee Deep in Sand, and then every level after that in small to medium groups or even large hordes.

The first Kleer in this game appears in Four Horsemen of the Apocalypse. Just like in every other game, they are seen on pretty much every level in small to medium groups.

The resurrected skeleton of a Kleer is held together with magical links, giving them more resilence than a human or Gnaar. The magical links, however, are not overall that strong; a powerful blow wlll shatter the skeleton into pieces. Despite their seemingly frail structure, their speed and leaping ability is not to be underestimated. They can run slightly faster than an adult human, and it is impossible to outrun a Kleer, even by sprinting away from it.

Like the majority of troops in Mental's army, Kleers lack tactics and will usually just charge straight towards the target, though sometimes they will attempt to use flanking maneuvers in some games if the player puts their crosshairs on them. This behavior is also shared with the Beheaded Kamikaze. At close range, Kleers will use their scythe-like claws to slash at the target repeatedly, which deals low-moderate damage per hit (each attack hits twice). They will also use their claws with their leap attack from medium range, which deals much higher damage. They can use their claws to dig underground or cling onto walls, which gives them good grip.

When a Kleer spots the player from medium to far range, they will conjure twin vertical chainballs one after another in a single direction towards them. These chainballs are low-grade, non-tracking projectiles, but cannot be destroyed until they hit an object or travel a certain long distance. However, due to their large size, it's easy for them to hit small objects or other enemies in the way. Kleers are immune to their own chainballs.

On Serious difficulty in the Serious Sam Fusion version of Serious Sam 3, Kleers have a chance to conjure electric chainballs that travel horizontally which have a bigger hitbox than their regular chainballs, making them slightly harder to avoid. In Serious Sam 4, Kleers can throw horizontal chainballs too, but they are not electric unlike in the previous game. In addition, they are now twice as damaging as vertical chainballs.

Concept art of the Alpha model. 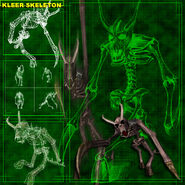 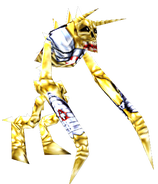 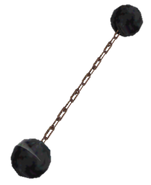 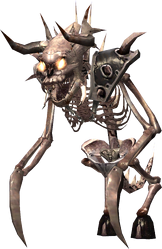 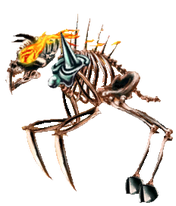 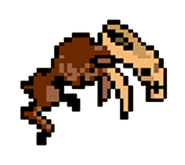 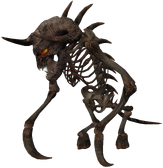 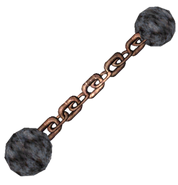 The Kleer in Serious Sam VR: The Last Hope. 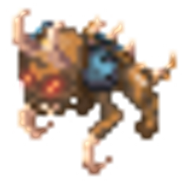 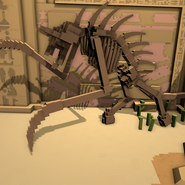 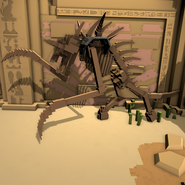 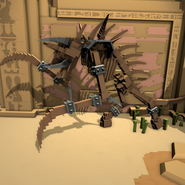 A Kleer leaping at the player. 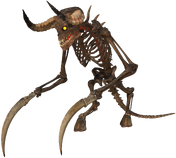