"I'm gonna cut you into little pieces!"
―Sam to a Khnum after it eats Jones.[src]

The Khnum is a large bipedal creature standing about twice as tall as an adult human. Their species are a sentient race of creatures that evolved on a planet in the system of Lambda Arietis. Powerful and aggressive, the Khnum crushed the other species into submission, and soon declared themselves gods and demanded to be worshipped. When they encountered Mental, they recognized his superior military might and willingly joined his army, where they occupy positions of great prestige.

Appearance-wise, Khnums are very large creatures with a head that features red eyes, a gaping mouth showing razor teeth and two prominent horns similar to a goat, but not practical for use as a weapon. Due to the shape of its horns, it is often associated with the Egyptian god Khnum. They do not have feet; rather, they have two large hooves that, while slow, allow it to walk as fast as the player. They do have hands, each with three fingers and what appears to be an opposable thumb. Their skin is extremely thick, with only rounds surpassing 30 mm caliber being able to penetrate it.

In Serious Sam 4, the Khnum has been given a different design; it is covered in patches of dark grey skin, has sharper horns, and its eyes are more orange than red. It also has new sounds.

The Khnum first appears in Serious Sam 3 as a passing feature, looking at the player but does not engage, as if disinterested. The first Khnum encountered in the game serves as a boss. It is fought in Unearthing the Sun in an enclosed space filled with pillars, and has over twice as much health as a normal Khnum. Later on, Khnums appear most commonly alone or in pairs with groups of enemies. However, in the final level, several can appear at the same time. They usually appear with larger amount of weaker enemies. On easy difficulties, Khnums walk at a relatively slow pace. On harder difficulties, Khnums will walk/run faster at roughly the same speed as the player's walking pace.

Legend of the Beast[]

The Khnum appears in Legend of the Beast as the final boss of the 3-level mini-campaign. It is found waiting for the player on its throne in a sacrificial chamber and wears the Shrine of Amon-Ra. The room has a number of columns, which the Khnum can easily smash, but they can protect the player from incoming fireballs.

The Khnum has a tremendous health amount of 100,000 HP, which makes it the boss with the second highest health in the Serious Sam series, only exceeded by the Mental Institution (with 1,000,000) from Serious Sam 2. Canonically, the Legend of the Beast Khnum has the highest health of any Serious Sam boss. Given that fact, the player's weapons will do virtually no harm to it. Although, once all 6 switches are activated, if the Khnum is hit by the electric beam, the beam will erase 1/3 of its health if it stands in it for the full duration (the Khnum is stunned while hit by the beam). The Khnum will also punch the player if they get too close.

Unlike Khnums in the original version of Serious Sam 3, the Khnum from the Legend of the Beast is vulnerable to every weapon, aside from the Serious Bomb (which the player cannot acquire normally in the mini-campaign anyway).

Like the Khnum in Serious Sam 3, the first Khnum that appears is encountered as a miniboss. It is first seen in Four Horsemen of the Apocalypse, carrying the beacon that Thomas Jones was meant to place, shortly before the Khnum eats him. Sam defeats the Khnum and, enraged, shoves the beacon right into its skull afterwards, avenging Jones's death.

In the later levels, Khnums start becoming more frequent, usually in groups of up to three. They become much more numerous in the final level.

Khnums, along with Major Bio-mechanoids, are some of the strongest and most dangerous creatures seen in Mental's Horde. As Khnums are very large and powerful creatures, they are mostly used for charging straight towards enemy forces in the line of fire and to deal a devastating strike with its charge attack. From a distance, Khnums are used for providing support to weaker forces with their fireballs and to flush out targets in open areas with little cover.

Khnums are extraordinarily strong and dangerous opponents. Their skin is remarkably thick and their tissue has regenerative capacities that are unmatched in the known universe. Although they are not actually divine, they are still formidable opponents and should not be underestimated.

When the Khnum spots the target, it has several attacks it may perform; if the target gets too close, it may attempt a swipe, which deals high damage. Also, it may use a hoof stomp attack which is faster, but does less damage. When a Khnum is close enough to the target, it will start charging towards them. In Serious Sam 4, the Khnum will only travel in a straight line when charging in a similar manner to the Sirian Werebull, unlike the Khnum from the previous games.

The Khnum's ranged attack involves conjuring one to three fireballs in its hand. It can toss it quickly for a quick attack, but this has less range and the fireballs are tightly grouped together. The Khnum usually performs this attack when it sees incoming projectiles from the player (such as rockets) and is strafing to dodge them. It may also charge the fireballs, which is easily visible by the glow in its hand. This will make the fireballs travel great distances and also spread them out. If a large portion of the Khnum's health has been depleted, or if it takes rapid damage, it will be temporarily stunned and unable to attack with fireballs. In the original version of Serious Sam 3, the Khnum throws three fireballs regardless of the difficulty setting enabled. In Serious Sam Fusion, however, it now throws only one fireball at a time on lower difficulties.

Although the fireballs have no target tracking of their own, the Khnum can throw them so that if the target is moving, it will hit the target if it continues its movement in the same direction. An easy counter for this is to change direction. The fireballs travel extremely fast and cause immense amounts of damage to the player's health, especially in the original version of Serious Sam 3, where they deal 60 damage. Unlike missiles and fireballs in earlier Serious Sam games, a Khnum's fireballs are immune to gunfire.

In Serious Sam 4, the Khnum can be ridden by the player if they have unlocked the respective skill in the S.A.M. system. When riding a Khnum, the same controls for riding a vehicle apply to the Khnum. The player can also fire their weapons from the Khnum while riding it. Like other mountable enemies, the Khnum's health will be displayed by a HUD icon on the bottom-left corner of the screen. Once the Khnum is dead or if the player presses the melee button, the player will be dismounted from it.

Legend of the Beast concept art. 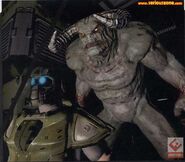 The prototype Khnum with Canned Cain in a 2006 screenshot showcasing Serious Engine 3. 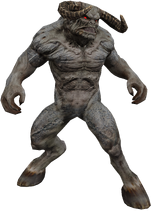 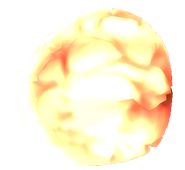 Fireball tossed by the Khnum.

The Khnum in Serious Sam VR: The Last Hope. 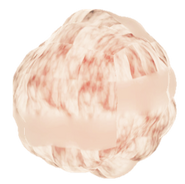 Fireball tossed by the Khnum.