200
The Kamikaze Marine Mark II is an enemy that appears in Serious Sam: Next Encounter.

The Kamikaze Mark Marine II were originally Sirian soldiers that betrayed their own people in order to work with Mental. As they wanted to serve Mental, he “rewarded” them by locking them into a dark dungeon and began torturing them for many, many years. During torture, Mental brainwashed them into being loyal soldiers for him.

After they become completely loyal, Mental strapped a huge stick of dynamite on their back and told them to charge at an enemy and then blow up. The Marines were more than happy to accept the assignment, as it would both let them serve Mental and finally end their pain.

Kamikaze marine Mark IIs are rare throughout the game. They appear only a few levels, and even there, their appearances are few. 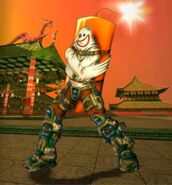