"A brain with a mouth. I guess it's hungry for new ideas."
―Sam Stone[src]

The Kalopsy is a strange flying creature that appears as a large floating brain with a mouth. It is first introduced as an enemy in Serious Sam VR: The Last Hope and later appears in Serious Sam 4.

The Kalopsy is an unusual alien lifeform whose origins are not known. They may be the result of an experiment or perhaps an creature found on some distant planet that has been modified to suit Mental's needs. On the rear part of the creature is a mechanical device anchored into its body that allows it to propel itself around.

In Serious Sam 4, Kalopsies first appear in The Die is Cast. They are not encountered very often. When they do appear, it's usually sparingly or when a big fight begins. They become more common later in the game.

The Kalopsy's behavior is unique in comparison to other enemies: when not engaged in combat, it may occasionally spawn 5 guided projectiles, but when shot at, it will continouly spawn such projectiles until its target is overwhelmed. If a Kalopsy's projectile hits the player, it will cause their screen to shake a bit and then return to normal. When a Kalopsy has been killed, it will explode and release a massive burst of projectiles.

Rear view of the Kalopsy. Note the mechanical device anchored into it. 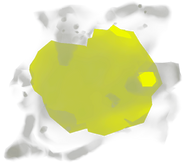 Projectile fired by the Kalopsy.